The AR-15 is equally capable of chambering 300 Blackout and 9mm Parabellum. Both cartridges can function as supersonic and subsonic loads with short barrels. Both can be effectively suppressed when loaded as subs. Both provide similar AR configurations to accomplish this. So, 300 BLK is a pretty direct competitor to 9mm when it comes to building a subsonic, compact AR that can still fire supersonic rounds. Which one should you go with? We're comparing 300 Blackout vs. 9mm Parabellum today, especially as both cartridges relate to the AR platform.

300 Blackout at a Glance

The .300 AAC Blackout (or simply 300 BLK) cartridge is a necked down 5.56 shell casing topped with a .308 bullet. Officially, it measures 7.62x35mm. It was developed by Advanced Armament Corps. (AAC) for special operations, at a time when SOF units wanted a cartridge capable of providing suppressed and un-suppressed fire with performance similar to the Russian 7.62x39mm found in the AK platform. Importantly, spec-ops wanted a round that could fit in the existing M4 platform with minimal modification. Since the round uses the same .223-diameter casing, the AR's original bolt and carrier can be used, as well as 5.56/.223 magazines, upper and lower receivers, and parts kits. The only modifications required to run .300 BLK include swapping the barrel, barrel extension, and gas system.


9mm Parabellum at a Glance

The 9mm Parabellum, 9mm Luger, or 9x19mm (7.65x21mm) cartridge is one of the oldest handgun loads still in service. It was produced in 1902 in Germany for the Luger pistol, and today it remains one of the most popular sidearm cartridges for NATO and non-NATO forces. It's earned favor as "the world's most popular and widely used military handgun and submachine cartridge," per the 2014 edition of Cartridges of The World. It maintains that popularity thanks to its power, small size, high capacity, and, like 300 BLK, its wide range of grain weights and ability to be easily suppressed.

First, let’s break down the ballistic data of both cartridges. Keep in mind, these averages are based on each round being fired from an AR-15 with a 16" barrel. Because 9mm is usually fired from pistol barrels measuring 4" to 7", most other data available on this round’s energy and velocity will not be applicable. More on that later. The measurements provided below are taken at the muzzle from each cartridge being fired.

On average, 300 Blackout and 9mm supersonics provide similar grain weights (125 grains vs 115 grains beyond two common loads), while 300 BLK maintains a velocity that is approximately 45% faster at this weight. That extra velocity translates into significantly more energy: 300 BLK punches with nearly three times (272%) more pound-feet at the muzzle. But keep in mind, these comparisons are made with a 16" barrel.

Overall, 300 Blackout performs with better velocity and more power than 9mm when supersonic loads are compared. This is not surprising, considering the amount of powder 300 Blackout holds in its casing compared to 9mm. All that extra powder translates into a higher maximum capacity:

This greater case pressure, coupled with 300 Blackout's generally larger bullet, is what provides its greater performance. But importantly, 9mm is not lost in this comparison. It can provide similar performance with supersonic +p+ loads. Underwood Ammo, for example, provides a 124-grain 9mm cartridge that provides 1,300 FPS and 465 lb.-ft. of muzzle energy. That's only 7% less muzzle energy than a 220-grain 300 Blackout, and it's about equal in energy to a 185- to 200-grain 300 Blackout load.

There are also "extra-heavy" +M loads for 9mm that are perfect for subsonic performance, traveling around 900 FPS at the muzzle. Seismic Ammo's 185-grain load provides this velocity with plenty of lead to afford a devastating effect on any target, rivaling performance of similar 180- to 190-grain 300 Blackout cartridges.

Lastly, 9mm excels as a personal defense cartridge. The 300 Blackout is still a rifle cartridge firing a long, thin .308 bullet. When it comes to close engagements and self-defense, even while providing more energy, 300 BLK simply cannot compete with the wide range of hollow-point and critical defense ammunition developed for the 9mm cartridge. With some 9mm loads expanding up to 0.75" in diameter upon striking tissue, the Parabellum can leave an utterly devastating wound channel that a subsonic (and even supersonic) .30-cal rifle load simply can't replicate, especially at close range.

We've established that 300 Blackout tends to hold a slight performance benefit over 9mm downrange, but 9mm can still compete and even win handily at close range, especially where personal defense is concerned. But what about the AR platform these two loads can be chambered in? The AR9 and AR-15 appear similar in appearance, but their function and size differ can (and in some cases, do) differ substantially. Let's take a look at the 9mm AR, dubbed the AR9, and the AR-15 converted to chamber 300 Blackout.

The AR9 platform certainly looks like a regular old AR-15. Except underneath that handguard is no gas system. You don't need a gas block or tube, or gas key atop your bolt carrier group, to run your 9mm AR. That's because the 9mm cartridge operates on blow-back: The force of the spent casing is what drives the bolt and semiautomatic function. The 9mm AR lower receiver is also physically different, since most AR9s use Glock magazines: 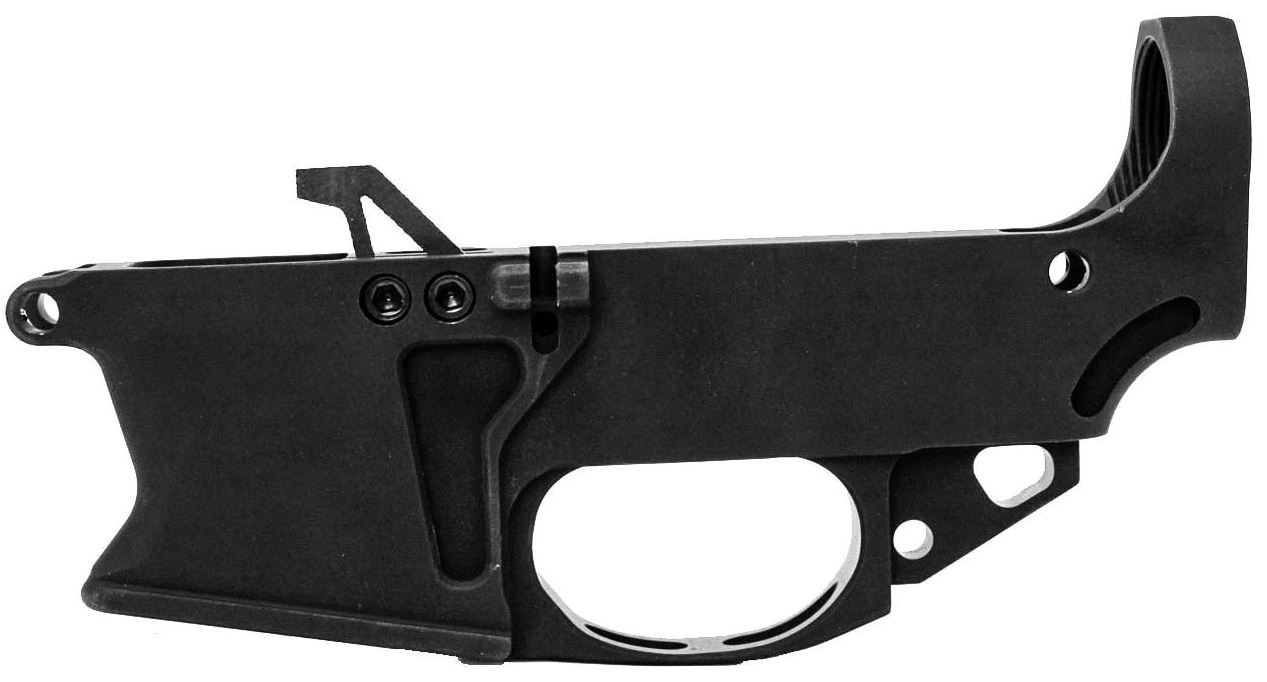 You'll notice the unique ejector required for shell casing extraction. This is because the AR platform was originally designed with a delayed, rotating bolt. But since no gas system is present to function with a delayed rotating bolt, the conventional AR-15 bolt and extractor are not utilized. Also notice the much smaller magazine well. It is resized for 9mm magazines. All other specifications remain the same. The AR9 utilizes an AR-15 lower parts kit, including the same hammer, trigger, disconnector, safety, springs, pins, and buffer tube. 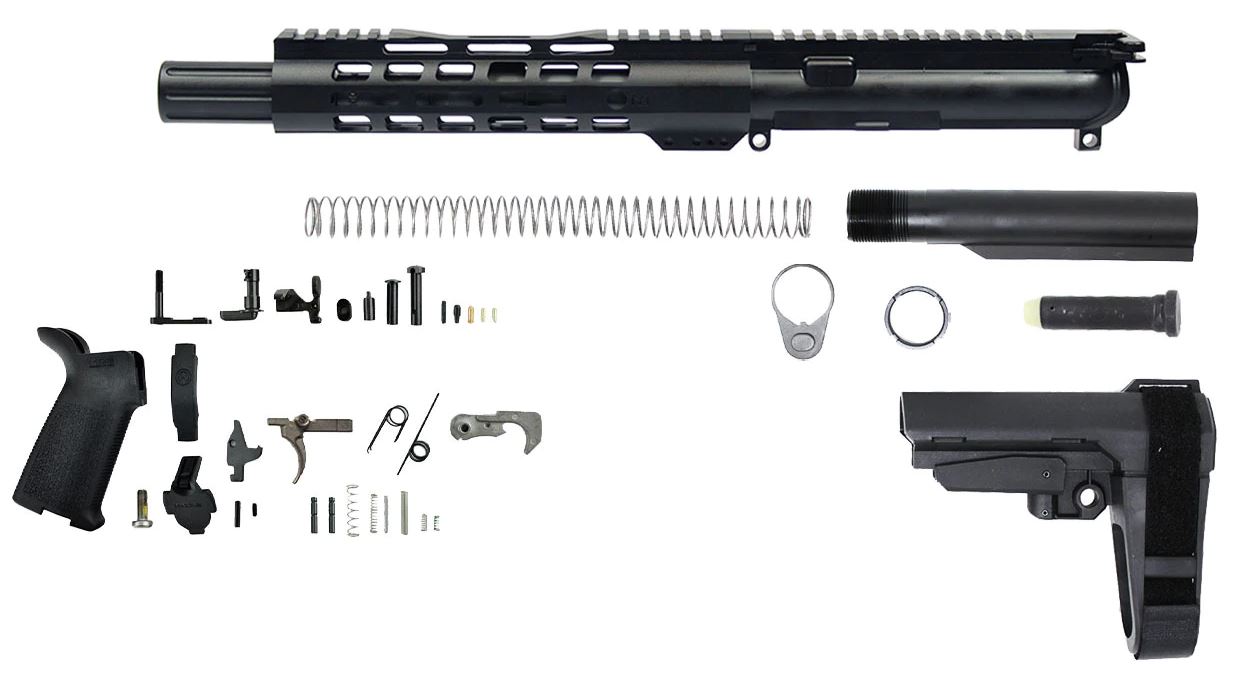 The 300 Blackout AR-15 is just about as close to a regular 5.56/.223 rifle or pistol as you'll find. That's because it was specifically designed to function in the existing platform with only swapping the barrel and Carbine- , Mid-length, or Rifle-length gas system for a Pistol-length gas system to accommodate subsonic loads. Like 5.56/.223 guns, this configuration uses all other original components: bolt carrier assembly, gas system design, lower parts, lower receiver, buffer tube, and buttstock or brace.

Optimal Configurations for 9mm and 300 BLK

The 300 Blackout cartridge generally performs well with a 9" to 10.5" barrel. Anything approaching 11" to 12" is considered nominal for maximum velocity with either subsonic or supersonic loads. This is also where the AR9 might get a leg up on the 300 cartridge: It is designed to burn its powder quickly and was originally made for handguns. Therefore, the 9mm can get away with using a shorter barrel. AR9s equipped with a 7.5" to 9" barrel are considered nominal for maximum velocity with any grain weight.

So, Which Cartridge is Better for My AR?

The answer to this question depends entirely on what you want your AR to do. The AR9 is perhaps one of the best close-quarters personal defense weapons available. Its incredibly lightweight and smaller than the AR-15. It's arguably more reliable, since it uses blow-back gas. It gets away with using a shorter barrel and it can be suppressed for incredibly quiet operation.

The 300 Blackout still excels at close-quarters performance and it, too, can provide incredibly quiet operation when suppressed and fired subsonic. Overall, 300 Blackout can out-gun 9mm beyond distances of 150 meters or more, approaching 300 meters to 400 meters with acceptable accuracy in a supersonic configuration. The 9mm cartridge is accurate at any grain weight within 150 meters, but it cannot perform reliably at those greater distances.

A: Yes, to both cartridges. Converting to 300 Blackout is much easier: All you need to do is swap the barrel and gas system. Converting to 9mm requires swapping your barrel, bolt and carrier, and optionally, your lower receiver. You can instead use a 9mm conversion block in your existing 5.56/.223 receiver, but a 9mm dedicated lower is ideal.

Q: I want to shoot mostly subsonic ammo. Which should I pick?

A: Both cartridges are capable of providing great performance with subsonic loads. As long as you're firing loads slower than 1,125 FPS, you will enjoy an effectively quiet AR with a suppressor, whether it's 300 BLK or 9mm.

Q: What is the max effective range of both cartridges?

A: Most claim that 9mm's max effective range is 100 meters, but this is conventional thinking based on the round being fired from a handgun. AR9 owners are able to consistently hit their targets at 150 to 200 meters. Since 300 Blackout gets the advantage of supersonic travel, its max effective range is said to be around 460 meters.

Q: How does the 9mm bolt work in the AR's upper if it doesn't have a gas system?

A: The 9mm bolt is simply forced into the buffer tube by the pressure of the spent shell casing as it ejects from the receiver. To accommodate the shape of the AR-15's upper, including the channel inside the top of the receiver, the 9mm bolt has a machined piece of steel where the gas key would otherwise be installed.