This next section of our  Master Guide to AR-15 Parts for builders dives into the components and functions of the AR-15's gas system. Learn the differences between direct-impingement and piston-driven systems and all the important stuff you need to know for your build: Gas tube lengths, gas block diameters and types, and what setup you should use for building a reliable rifle, SBR, and compact AR pistol.

How Does the AR-15 Gas System Work?

The AR-15's gas system is a direct-impingement system: It forces excess gas produced by a live round's ignited gunpowder directly into the bolt carrier group in order to cycle the weapon for semiautomatic fire. The direct-impingement system consists of four components: The gas port, a small hole in the barrel which allows excess gas to escape, the gas block, which installs directly to the port on the barrel, the gas tube, which connects to the gas block, and the carrier key (commonly called a gas key), which is installed atop the bolt carrier.

Animated in red above, excess gas produced by the ignited gunpowder trails behind the live round at an incredibly high rate of speed as it exits the barrel. As it nears the muzzle, the port in the barrel allows some of that gas to escape into the block. In the animation above, a traditional A2-style front sight post and gas block combo is responsible for collecting this gas. The block redirects the gas through the gas tube in the opposite direction, back into a port in the upper receiver, located directly above the barrel nut. Part of the tube protrudes inside the receiver itself, where it meets the carrier key. Gas is directed into the hollow carrier through the key, where it's allowed to expand inside a sealed chamber around the back of the bolt.

Explained in greater detail in our Guide to AR Bolt Carrier Groups, this trapped gas forces the rotating bolt to unlock from the firing chamber. As it does, that same energy rapidly drives the BCG backwards into the buffer tube, cycling the trigger assembly, ejecting the spent shell casing, and chambering a new round from the magazine.

The gas system starts at the port, a small hole drilled directly into the barrel. The port allows gas produced inside the barrel to escape, to be vented into the gas block.

Gas port diameter simply measures how wide the gas port is on the barrel. A collection of measurements from different manufacturers and barrel makers illustrates that port diameters tend to fall within certain ranges. These are the most common ranges of diameters you'll find on AR-15 barrels measuring 11.5" to 24" in length. Port diameter also changes depending on the thickness of the barrel itself (0.625", 0.750", or 0.825"):

A note about port diameters and performance:

If you've already built an AR and are experiencing issues with the gas system (like over-gassing and excessive recoil or conversely, short strokes, failures to feed or cycle, or jams) it is strongly recommended you first attempt to replace the buffer with a lighter or heavier unit, followed by installing an adjustable gas block (discussed in the next section). Modifying the gas port diameter can have disastrous consequences, requiring a barrel swap. Because port diameters are often non-specific to barrel length and gas tube length as shown above, it is difficult to identify "the perfect diameter" for any one cartridge and setup.

To safely handle the extreme heat and pressure of the gas being produced in the barrel, the gas block is made from forged, hardened steel. Most are coated with phosphate or nitride, though some are made from stainless steel to resist rust and corrosion. Gas blocks can take many different forms, each with their own features: 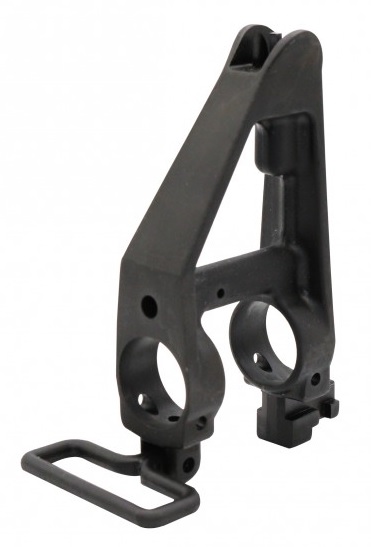 The A2 front sight post is the original gas block designed for the AR-15 by Eugene Stone in the mid-1950s. It incorporates both the front sight with elevation adjustments, and the port for the gas tube to connect to. Produced in anticipation of conventional warfare, most A2 blocks also include a bayonet lug and sling attachment. These blocks are not adjustable, though they're often the most robust. The A2 FSB can be used with the traditional two-piece handguard, or a free-float handguard. 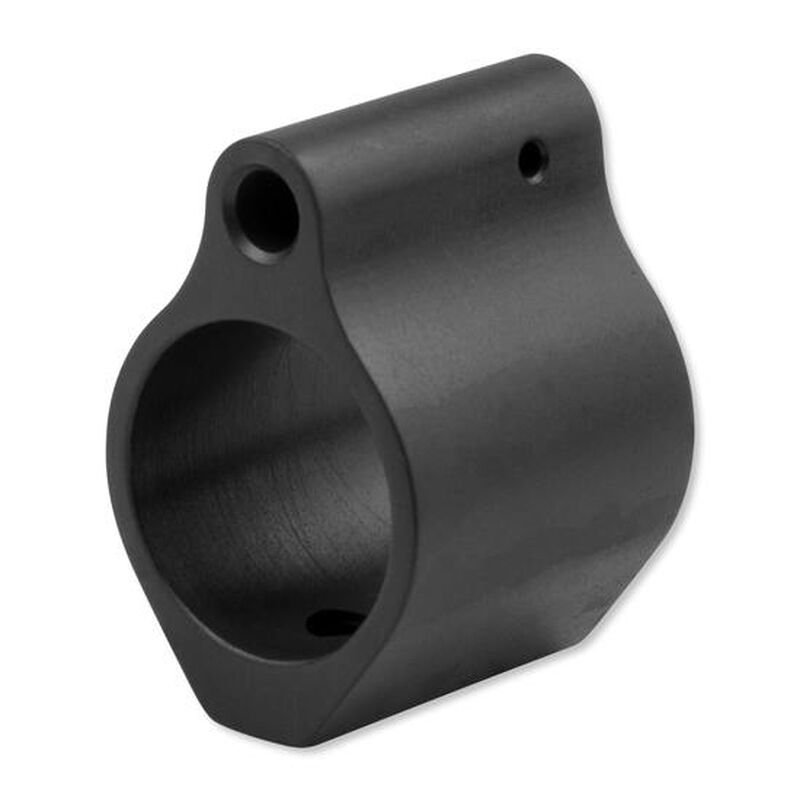 The low-profile gas block is the most common and affordable type of block found on most AR-15s and uppers today. Its compact design and lack of a bulky front sight post allows for a free-float handguard to extend all the way to the end of the muzzle. This allows for installing more accessories, lights, or a forward grip near the muzzle for better control when firing ( shown on this 13.5" M-Lok handguard-equipped upper with a 16" barrel). 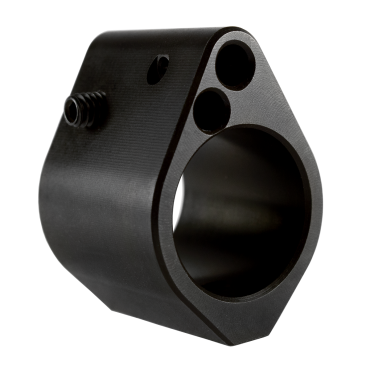 The AR-15 is a modular weapon system capable of handling different cartridges (like 300 Blackout). There are also a plethora of 5.56 and .223 Remington cartridges, each with their own amounts of gunpowder and different bullet weights. Different cartridges will affect the amount of energy produced by the AR-15's gas system, and this can lead to your rifle or pistol feeling over-gassed. Worse, it may fail to fully cycle the weapon. To alleviate these issues, the adjustable gas block was developed.

Shown above, an adjustable block is outfitted with a set screw. This screw can be threaded in or out of the block, and doing so effectively controls how much gas is diverted into the tube or diverted away from the tube. Adjustable blocks are categorized as either cut-off or bleed-off blocks. A cut-off block restricts how much gas enters the block, instead forcing the rest out of the muzzle. A bleed-off block allows excess gas to vent into the atmosphere, away from the shooter.

If you're building a black rifle chambered in .300 BLK (and you want to reliably fire subsonic and supersonic cartridges suppressed and un-suppressed), then you'll likely need an adjustable gas block to ensure your weapon cycles without excessive recoil or a failure to eject and chamber.

The gas block diameter (not to be confused with gas port diameter) measures how big the block is in relation to the diameter of the barrel. Thin "pencil-profile" barrels call for a 0.625" block, while conventional AR-15 barrels with an M4/Government profile (the most common profile in the market) call for a 0.750" diameter block. Bull barrels will require a gas block measuring 0.875" or 0.936".

The gas tube is responsible for connecting the gas port and block to the carrier key in the upper receiver. To withstand heat, rust and corrosion, gas tubes are most often manufactured from 304 stainless steel.

There are four gas tube lengths, each designed for different barrel lengths, cartridges, and applications:

The pistol-length gas tube is the shortest tube available for the AR-15. If you're running a barrel shorter than 10", you'll need the shortest gas tube length possible to capture the necessary energy to reliably cycle the bolt, as dwell time (the amount of time the BCG is receiving gas pressure) with this barrel length is shortest. A pistol-length gas system is also optimal (if not required) for  300 Blackout builds.

The carbine-length gas tube is one of the most common tubes used on AR-15 rifles sold at retail, as well as many  pre-built uppers. Many builders and rifle manufacturers opt for the carbine-length system because it provides the most reliability with any cartridge and load. Carbine-length systems can feel "over-gassed" and punchy with a 16" - this length was originally designed for the M4's shorter 14.5" barrel - though their power can overcome grime, built-up carbon, and other factors which might otherwise cause a failure to feed (or a jam).

The mid-length gas system is what you should stick with if you're  building a standard rifle with a 16" barrel, the minimum legal length you can install without registering the weapon as a short-barreled rifle (unless you pin your muzzle device measuring at least 1.5"). A mid-length system provides excellent reliability like a carbine system, though it produces less force and general wear-and-tear on the BCG, buffer, and internals.

Eugene Stoner designed the rifle-length gas system for the original AR-15's (and later the M16's) 20" barrel in the 1950s. Today, the rifle gas system is used on match-grade or longer bench rifles meant for distance and accuracy. The rifle-length system is also technically the most reliable gas system: It provides the longest dwell time to cycle the BCG, yet the gas cools before reaching the receiver, reducing heat and pressure that causes wear and tear.

The direct-impingement system is utterly reliably, even when the AR gets dirty or gunked up. But for those who want more adjustability and a cleaner-running weapon, the alternative piston-driven gas system was developed. The AR's piston system is now made by different manufacturers and varies in general features and detail, but the core design and operation remain the same: A modified gas block and larger gas tube forces a spring-loaded, hardened steel piston to drive the bolt via a modified carrier key, as shown above.

To afford universal compatibility (and greater convenience for those running a suppressor or different cartridges), the piston system can be fine-tuned like an adjustable gas block. Shown above, excess gas is diverted to the atmosphere and away from the shooter, preventing over-gassing and excessive recoil. Switching to a subsonic round or faster-burning powder means one need only "dial up" the piston to accept more gas, transfering more energy to the bolt so it reliably cycles.

Unlike direct-impingement, the piston systtem doesn't allow any gas to enter the upper receiver. This dramatically reduces the amount of fouling and carbon build-up normally seen in conventional ARs. Because the piston captures inertia and uses a spring to rebound, there is less felt recoil, too.

Piston gas systems are much heavier than direct-impingement systems. where a lightweight, hollow gas tube is replaced by a heavy rod and spring (and larger gas block), weight is added to the front end of the weapon. Piston systems must also be dialed in for the chosen cartridge, barrel length, and buffer assembly. They may be more susceptible to suffering failures to function due changes in powder and cartridge type.