You want to build a black rifle, but you're not sure which caliber to go with. Maybe you just want to know the differences between the three most popular calibers the AR-15 can easily chamber: 300 Blackout, 5.56 NATO or .223 Remington, and .308 Winchester (technically called an "AR-10" or "AR-308" by builders).

Each of these three calibers is wildly different. 300 Blackout is one helluva tactical round. It can be fired suppressed or un-suppressed and is considered an intermediate round between .308 and 5.56/.223. Using the big, bad .308 Winchester means swapping out your upper and lower receivers, barrel, and gas system at the least. Of course, 5.56 and .223 are the gold standard lightweight, run-n'-gun cartridges for home defense, small game, competition, and plinking.

This guide compares all three calibers with some nice ballistics data and performance comparisons. 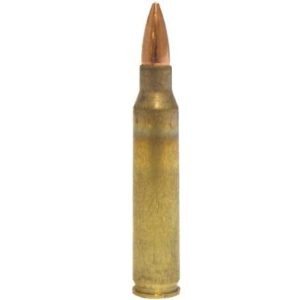 These two calibers are what got the AR-15 rifle off Eugene Stoner's drawing board and into the production facility. The original black rifle was developed in the 1950's to meet the military's demand for a smaller, lighter combat rifle. The AR-15 took the .30-caliber round of wars' past and shrunk it down to a high-powered .22-caliber cartridge (.223 Remington). Eventually, military brass requested even more performance out of the military's round, so they adopted the 5.56 NATO with some unique cartridge designs in the 1960's (like steel-core penetrators for hard targets at distance). Both cartridges perform quite similarly but slight differences in chamber pressure (see below) mean that you can't safely fire 5.56 NATO in a .223 chamber. 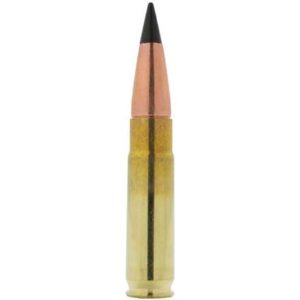 The official multi-purpose cartridge of many special forces units, 300 Blackout was developed by the U.S. Military, too. Operators and SOF commanders wanted a round that provided similar performance to Russia's 7.62x39mm AK-47 cartridge. They also needed a round that could be fired with a suppressor (or without) with one rifle, but with no modifications required to make the switch in the field.

300 Blackout comes in two types of cartridges to satisfy this requirement. Supersonic loads use a light-grain bullet to break the sound barrier (1,125 ft/s) and offer long-range performance, while subsonic loads use heavier rounds to keep things quiet (and to pack a punch) at close range.

Note how muzzle energy drops by more than half when switching from supersonic to subsonic. Keeping things quiet comes at a cost. Subsonic loads are usually fired at distances less than 100 meters. Hunting with subsonic loads is also strongly discouraged. Many hunters report poor terminal performance against deer and wild boar at "average" distances. 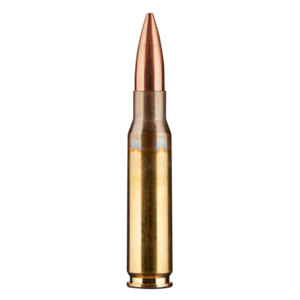 The .308 Winchester is technically the first round ever put through the barrel of an AR-platform rifle. Eugene Stoner developed the original ArmaLite AR-10 one year before introducing the smaller AR-15. The big brother to 5.56 and .223 packs much more ballistic performance and range, sacrificing size and weight for distance. It also packs more recoil, but it provides greatly improved resistance to wind drift and bullet drop when compared to 5.56, .223, and .300 BLK.

Let's compare these three rounds side-by-side. Below, the graph and chart shows each cartridge's commonly available grain weights with their velocity and energy at the muzzle, 100 yards, and 200 yards. 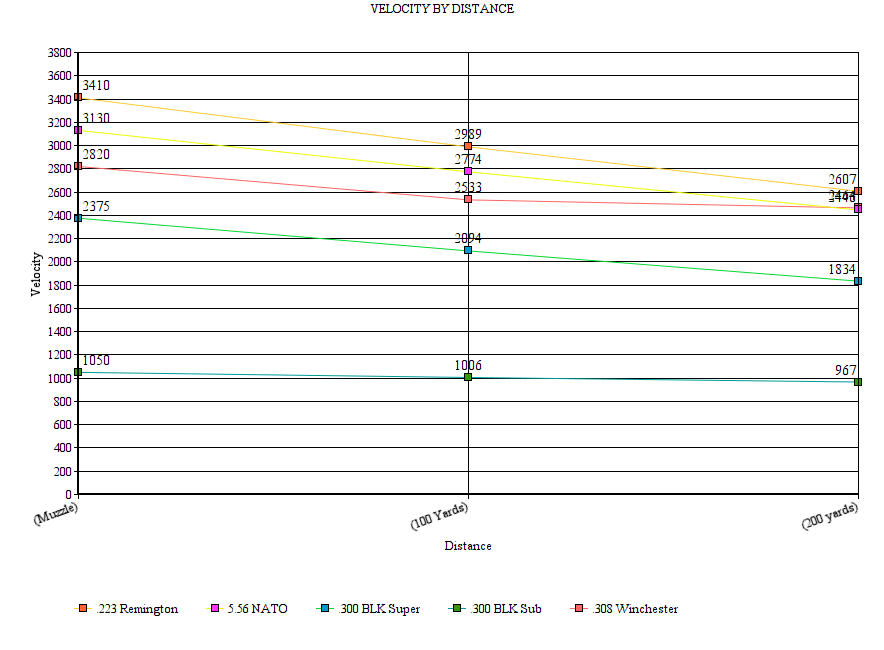 Reviewing the chart and data graph, you can see that .308 Winchester's higher ballistic coefficient is bolstered by the round's ability to retain velocity at greater distances. Comparing losses in velocity from the muzzle to 200 yards, 5.56 NATO loses approximately 22% of its velocity, while .308 Win loses around 20%. This same logic applies to all cartridges - 300 Blackout subsonic in particular. Notice it, too, maintains a comparatively high ballistic coefficient (0.315, higher than .308), thus affording a flatter velocity curve and more consistent accuracy to its max range.