The AR-15 is a uniquely amazing weapon platform for many reasons. For one, it can chamber nearly 100 different calibers! Ninety-five, to be exact. But for all those cartridges, there are just two that make up 90% of the market: 5.56 NATO and .223 Remington. Today, we're going to compare the two and answer all your questions, like:

What are the differences, anyway?

The internet has done its job of spreading misinformation about the differences between 5.56 NATO and .223 Remington, so let's put this to rest. By the end of this guide, you'll be able to crush claims and spread some truth about the black rifle's two most popular calibers. 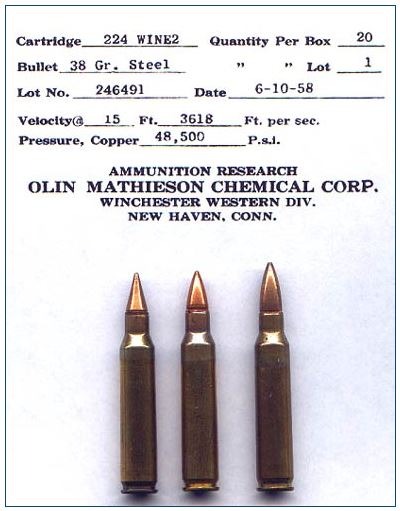 The military wanted to ditch the .30-caliber rounds of wars past, and it had its own requirements for the new round's performance.

And the rifle firing it had to weigh no more than 6 pounds.

This is a very quick-n-dirty summary of the round's development: Engineers figured out the bullet in question needed to weigh 55 grains and travel around 3,300 feet per second to meet these requirements. Those engineers settled on using the .222 Remington cartridge as a test bed, a popular varmint hunting round introduced in 1950. They made the cartridge longer and faster, and .223 Remington was born.

Unfortunately, .223 Remington did  not do a great job of penetrating steel targets at longer distances. It also had some reliability issues in Vietnam. To make .223 more deadly, reliable, and capable at range, the NATO requirements were beefed up. The round now had to penetrate a steel helmet at 800 yards (the same requirements for 7.62 NATO). 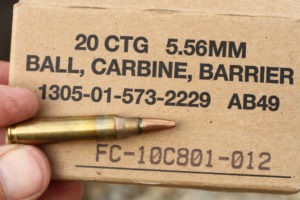 To accomplish this, new dimensions and internal chamber pressures were drafted for .223 Remington. The round was redesigned to have a better drag coefficient and higher velocity. Even more powder was added, the casing was beefed up to handle the added pressure, the chamber in the M16 was redesigned, and 5.56 NATO came to be.

If you didn't skip the history lesson, you now know the big difference between .223 Rem and 5.56 NATO. If you skipped it, well, here it is:

Shooting a 5.56 NATO cartridge out of an AR-15 with a .223 chamber will result in a greater pressure than the chamber is designed for. This over-pressurization is why most shooters say it's not safe to shoot 5.56 in a .223 gun. 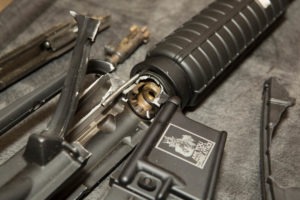 Significant over-pressurization of the chamber can cause the receiver walls and top rail to explode. This can be an incredibly dangerous event.

But this only tells half the story. It's not just more powder in the cartridge causing the higher chamber pressure with 5.56 loads in .223 guns.

The biggest difference between 5.56 and .223 isn't the cartridges, but the chamber and barrel of the gun itself.

Remember those reliability issues the M16 suffered in Vietnam? When the rifle got dirty and gunked up, tight tolerances made chambering rounds and cycling the weapon difficult. To alleviate this problem, engineers redesigned the M16's chamber and barrel just slightly. They made the leade of the chamber slightly larger ("sloppier"), so it wouldn't bind up in battlefield conditions. 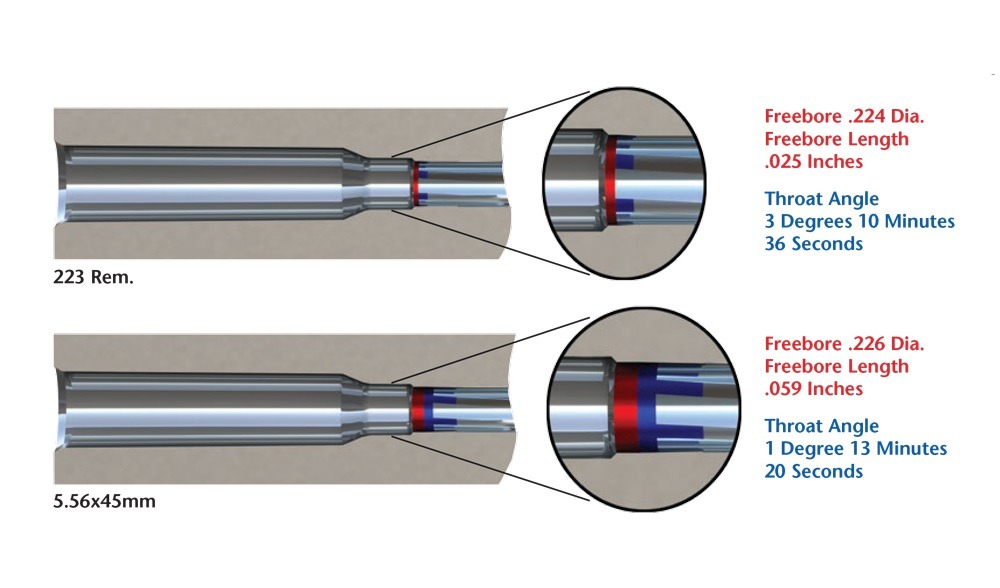 Exampled above, the leade is the throat, or opening of the chamber. This opening allows the bullet to reach through the chamber and into the barrel itself. The leade is measured as the distance between the mouth of the cartridge, and where the bullet touches the rifling.

Why The Leade Matters Most

As the bullet is fired, it travels through the leade and contacts the rifling. Friction slows the bullet down when this happens. The expanding gasses in the chamber have nowhere else to go, so they keep pushing on that bullet, forcing it to cut through the rifling and exit the muzzle. This is why chamber pressures quickly build when the bullet exits the leade.

This is where the real dangers of chambering 5.56 in a .223 gun come out: Shoving 5.56 NATO into the smaller leade of a .223 chamber will cause chamber pressures to build sooner. Those pressures can also quickly spike, possibly resulting in the exploded receiver you saw above.

There is simply no benefit or good reason to. Both cartridges are so readily available and similarly priced, there simply is no reason to risk over-pressuring your .223 gun with NATO rounds you bought at the local big box store. In fact, .223 Remington averages $0.22 to $0.29 cents a round. 5.56 NATO averages $0.23 to $0.30 cents per round.

You're literally saving pennies. But out of pure curiosity, how dangerous is shooting 5.56 in a .223 gun?

One seasoned AR-15 owner named Andrew spent months conducting tests, comparing 5.56 and .223 cartridges in AR-15s chambered for either round. After bravely testing 5.56 loads in a .223 gun, he came to a surprising conclusion: 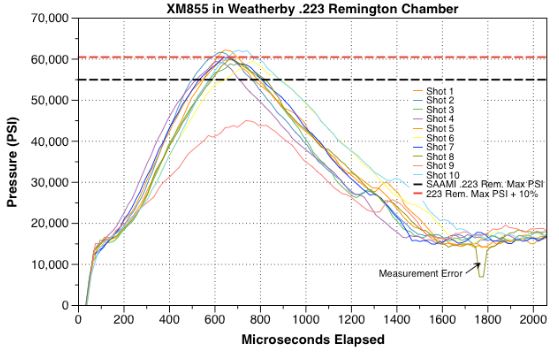 There simply isn't that much over-pressurization when the risk is taken. The graph above is Andrew's work. It illustrates ten 5.56 NATO rounds being fired in a .223-chambered rifle.

His data shows that firing 5.56 in a .223 chamber causes over-pressurization by approximately 10%. In fact, 5.56 NATO fired in a .223 chamber only reaches its average, regular PSI of 62,000. It doesn't generally climb any higher than that, even with the shorter leade and small differences in dimensions.

Nonetheless, this confirms an important fact: Shooting NATO rounds in a .223 chamber still means you're holding a dangerous weapon inches away from your face. That weapon is creating approximately 8,000 extra pounds per square inch of pressure, and it's just begging to be let out.

The .223 leade's tighter tolerances make for better accuracy because there's less "slop" between the chamber and barrel. That's why the .223 Wylde chamber was created.

The .223 Wylde barrel and chamber creates a safe middle ground that allows a shooter to fire either load accurately and safely. The Wylde leade sports the same, smaller freebore diameter (.224") as the .223 Remington chamber, but it also uses the same leade angle (1 degree, 13 minutes, 20 seconds) as 5.56 NATO.

This allows the Wylde chamber to handle the higher pressures of 5.56 NATO without spikes and over-pressurization, while also yielding the tight tolerances that give .223 Remington a slight edge in accuracy.