The bolt carrier group (BCG) is one of the most important moving parts in the AR-15. It takes the brunt of the recoil produced by the gas system while reliably cycling and ejecting ammunition. This builder's guide explains the operation and individual components of the AR-15 bolt carrier group. Learn what a "full-auto" BCG really is, what MPI testing and other acronyms mean, and see how the BCG functions with animated illustrations. By the end, you'll know everything you need to pick out the right bolt carrier group for your custom rifle.

You've probably looked at a few bolt carriers and came across buzzwords like "HPT tested" or "chrome-lined key". Here's what to look for if you want the best BCG for your AR-15:

Magnetic particle inspection is used to ensure there are no microscopic cracks or fissures in the bolt carrier group, which could cause it to fail during operation. During MPI testing, the BCG is coated with a magnetic dye and an electrical charge is applied. Under charge, the dye is attracted to imperfections in the metal which create a distortion in the magnetic field. The concentrated dye will make the imperfections visible for quality control. Shown below are cracks made visible in a barrel nut during MPI testing:

High-pressure testing is much less scientific, but it is equally effective: The bolt carrier group is installed in a barreled assembly and a "hot round" - a live cartridge loaded with excess powder - is fired to test the integrity of the carrier and bolt. The BCG is then removed and inspected for any failures.

To handle the heat, pressure, and friction created as the bolt rotates inside the carrier, most manufacturers line the interior of the BCG and gas key with chrome. Chrome lining won't look shiny or reflective - it appears silvery and matte:

The gas key is secured to the top of the carrier. Since it wears out before any other components, the key is made as a separate component and bolts to the body of the carrier. To ensure the key doesn't get loose after being subjected to gas and recoil, most BCGs will have staked keys. Staking the key prevents the bolts from turning inside the threads:

When the BCG rides back into the buffer tube, the bottom of the carrier (circled below) contacts the face of the hammer, pushing it down to reset the trigger assembly. This occurs with a high rate of speed and force. If your BCG's firing pin is un-shrouded, the head of the pin will contact the hammer instead of the carrier. This causes wear and tear on both the pin and hammer face. If the hammer is notched, the head of the pin can also occasionally catch the hammer. To prevent this, you should look for a BCG with a shrouded firing pin.

The AR-15 and M16 share most of their parts (the only major difference being the full-auto trigger assembly). Because of the different trigger assemblies and sears, the M16 BCG is shaped differently than the AR-15's commercial BCG:

Shown above, the M16 BCG's carrier sports additional metal at the rear, where it contacts the buffer. This additional material is required to operate the automatic sear in the trigger assembly, giving the M16 select fire capability.

A: No. Because the AR-15's lower parts kit and receiver don't contain an auto sear, the M16 BCG won't allow for fully automatic fire.

Q: Is owning or using an M16 BCG illegal?

A: No. The M16 BCG is not considered a machinegun part by the ATF, like an auto sear. You may legally own and use one in your semiautomatic AR-15 without any special requirements or restrictions.

Q: Are there any compatibility issues with using an M16 BCG?

A: No. Even though the M16's carrier is physically different, it is 100% compatible with any standard AR-15 buffer, parts kit, trigger, and upper and lower receiver, including any standard 80% lower.

Q: Is there any advantage to using one or the other?

A: The M16 BCG is heavier and will reduce felt recoil. This is beneficial if you're running a carbine or pistol gas system, which typically produces excess recoil. Because the carrier is reinforced, the M16 BCG is also capable of handling greater heat and energy during rapid fire.

Q: Are there any other differences between the two?

A: No. Besides the carrier itself, all other components are the same in both the AR-15 and M16 units. Both units use the same parts, illustrated in the Diagram section. Both also the same types of steel, covered below:

This is the original mil-spec steel used to create the bolt carrier itself. It has a moderate tensile strength (640 MPa) and yield strength (360 MPa). Carriers made from 8620 are the most affordable and provide acceptable resistance to wear and tear. This alloy is still in use by the U.S. Military and all service-issued rifles' carriers are made with 8620.

This is a superior alloy to 8620, developed after the AR-15 was originally designed. 9310 steel provides excellent resistance to the heat and pressure the BCG must withstand, offering a tensile strength of 910 MPa and yield strength of 570 MPa. Because of its high strength, 9310 steel is used to forge both the carrier and bolt in some BCGs.

The bolt itself is subjected to the highest heat, pressure and friction when live rounds are fired. To accommodate this, the bolt itself is made from Carpenter No. 158 steel, the mil-spec alloy favored by the military. It has high tensile strength (1103 MPa) and high yield strength (831 MPa).

This proprietary alloy is used by the Sharps Rifle Company to produce custom BCGs capable of withstanding excessive heat, pressure, recoil and friction. The S7 steel provides 2,030 MPa tensile strength and 1,520 MPa yield strength. Bolts produced with S7 steel are more expensive than any other alloy.

Most bolt carriers are coated with the same phosphate or nitride finishes that are applied to most AR-15 upper and lower receivers and barrels. These matte black treatments and the resulting coatings provide excellent resistance to heat and corrosion, requiring only occasional oiling and lubrication. It's important to note that nitride is the same as Melonite. Melonite is simply a brand name for the nitride treatment process.

Nickel Boron (NiB) is a metallic coating some manufacturers apply to their bolt carriers. This shiny, slick alloy dramatically reduces friction as the BCG rides back and forth inside the upper receiver and buffer tube. Nickel Boron is applied using a liquid chemical bath, protecting the metal underneath. NiB BCGs require less lubrication (or none at all) and they typically withstand heat and friction better than a standard phosphate or nitride-coated BCG. Because NiB is chrome-like, it wipes off and cleans easily, often requiring no solvents or harsh chemicals. NiB BCGs are typically much more expensive than a standard unit. 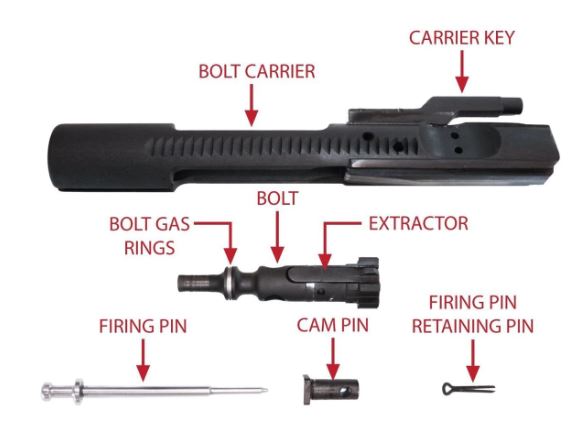 The bolt carrier is the hollow steel body which houses the bolt and firing pin. The carrier has two primary responsibilities: Allow gas pressure to build around the bolt to cycle the weapon, and reset the trigger assembly. To do this, the rear face of the carrier rides backwards and contacts the buffer and recoil spring inside the buffer tube. As it compresses the spring, the carrier also pushes the hammer down to reset the disconnector and trigger. The carrier then rides forward to allow the bolt to grab a fresh round from the magazine.

The carrier key (commonly called a "gas key" by AR enthusiasts) is bolted atop the carrier with two screws. The key is angular and hollow, allowing it to direct the gas from the gas tube into the carrier where the bolt resides.

The bolt houses the firing pin, extractor, and ejector. The bolt uses a series of lugs in a star shape to lock into the barrel extension. The barrel extension is typically called the "star chamber" for its matching star-shaped lug pattern. The bolt uses a cam pin (shown protruding from the carrier under the gas key) which acts as a stop against the carrier's body. This controls and limits the rotation of the bolt.

This design requires a sufficient amount of gas pressure to build up inside the carrier before the bolt will rotate and unlock. This pressure build-up ensures there is enough energy to reliably cycle the BCG, chamber a new round, and slam into battery. 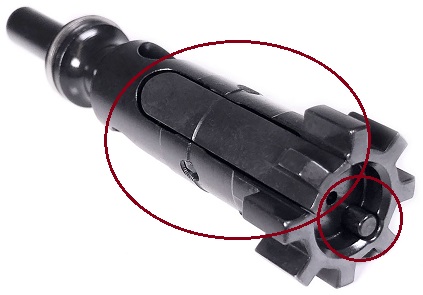 Secured to the exterior of the bolt is the extractor. As the bolt rides forward and chambers a round, the extractor clips onto the rim of the cartridge. This secures the bottom of the round to the bolt face, lining up the firing pin with the primer. At the same time, the spring-loaded ejector in the bolt face is compressed by the base of the cartridge. As the round is fired and the BCG recoils backward, the shell casing exits the firing chamber and the compressed spring under the ejector forces the casing out of the upper receiver.

Inside the carrier, the body of the bolt uses gas rings to form a small, sealed chamber underneath the gas key. Inside this chamber is where gas pressure built to rotate the bolt and cycle the BCG. Shown below, the highlighted area is where pressure is built. Also illustrated is the firing pin's orientation inside the bolt and the large hole for the cam pin:

Last but not least, the firing pin retaining pin (or simply "retainer") is a small cotter pin which installs perpendicular to the firing pin and BCG. The retainer acts as a stop for the firing pin, preventing it from falling out of the rear of the BCG while it is driven back and forth