You've heard the phrase way too many times now: "Mil-spec."  It's mostly a buzzword but it still plays a role in actual rifle and pistol specifications. Most notably, buffer tubes. They're officially called receiver extensions. But what's the difference between a commercial and mil-spec tube? Are they interchangeable? And how does that work with a commercial or mil-spec lower receiver?

What is a Buffer Tube?

The buffer tube (officially called a receiver extension) is the tube that threads onto the back of the AR-15's stripped lower receiver. It hosts the buttstock or pistol brace, and it houses the recoil spring and buffer. The spring and buffer provide the return action the bolt carrier group requires to slam forward, cycling ammunition during semiautomatic fire.

What is "Mil-Spec" Anyway?

Mil-spec has become a catchall phrase, especially in the world of the modern AR-15. It does not mean that any particular firearm or component was used by the military. It simply means that the part in question adheres to some or all of the general, written standards that are required of a military-issued firearm component. It's important to know that buying "mil-spec" parts does not mean you're buying some military-surplus hardware, or even parts the military used on service-issued rifles in the first place. For example, a mil-spec lower receiver uses the same forged aluminum alloy and the same anodized finish as an M4 or M16 receiver, but it will not be capable of housing a full-auto parts kit or other M4/M16-specific components.

And, rather anticlimactically, the term "mil-spec" as it relates to buffer tubes simply means that tube in question sports the same external dimensions and threads as a buffer tube that would fit on a military-issued Colt M4 or M16. This does not provide any inherent benefit, other than a guarantee that adhering to this standardization means a wider availability of parts across different brands and manufacturers can work together. For example, a "mil-spec "buffer tube from one company will appropriately thread onto the "mil-spec" receiver from a different manufacturer, while also making use of a "mil-spec" buttstock or from a third company. Let's compare those buffer tube measurements and clear up the confusion. 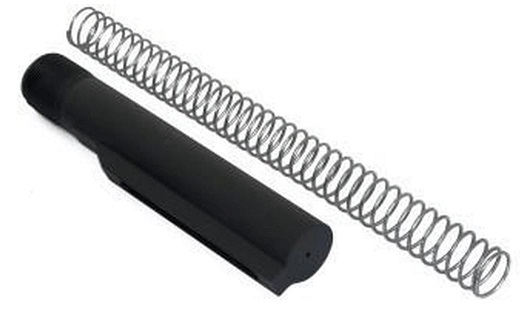 The three differences between commercial and mil-spec tubes are the external diameter, the threads used on either unit, and the material used to make either one. Let's start with diameter:

Buttstocks and pistol braces must be sized up for either commercial or mil-spec tubes, but they will never work on both. If you attempt to install a mil-spec buttstock on a commercial buffer tube, it won't fit since the opening on the stock will be too small. If you try the inverse, the buttstock or brace will be loose and wobbly on the tube, and it won't lock into position to set a good length of pull.

Someone out there is entertaining the idea of trying to fit a mil-spec tube onto a commercial receiver, anyway. But it can't be done, because the threads are also cut differently on both tubes:

Rolled threads are physically taller than cut threads, and typically maintain the same height as the external diameter of the tube itself. Cut threads are recessed, sporting a slightly smaller diameter than the tube's external diameter. So, even though commercial and mil-spec tubes' thread pitches match, one set of threads is still physically larger than the other. If you tried to thread a forged tube into a commercial lower receiver, it will cross-thread or simply not thread at all. If you threaded a commercial tube onto a forged receiver, it would be wobbly and the threads will likely "jump" or skip and bind up when turned.

Which Tube is Better?

Aluminum AR-15 parts that are considered mil-spec are typically forged from 7075-T6 aluminum. Commercial AR-15 parts are CNC-cut from 6061-T6 billet aluminum. Forged units tend to be stronger and more rigid, while billet aluminum units cut on CNC tend to produce a better finish. This applies to all components used on the AR-15 platform, whether it's a receiver, tube, handguard, or other component. Since adhering to the "mil-spec" fitment provides greater parts compatibility, and since the tube is a load-bearing component that must withstand recoil force, it's typically best to go with a mil-spec buffer tube.

Why Do Commercial Tubes Exist?

Forging a tube with threads means investing in complex equipment that can melt metal, and exert high amounts of heat and pressure with high precision. But simply cutting a buffer tube and some threads out of a raw block of material with a small CNC machine is quick and easy. Some manufacturers use nothing more than a lathe, which costs a fraction of a smelter and forge. That's truly the only reason for why commercial buffer tubes exist. Of course, that's not to say they can't offer some advantages over mil-spec tubes now that they're on the market.

Not all receivers are mil-spec

Today, most lower receivers -- even those not forged but instead CNC'd from billet -- have mil-spec threads so they can accept mil-spec buffer tubes. But other lower receivers are on the market that have unique designs, custom fasteners and commercial specs. If you find that special billet receiver you just have to have because it has that rollmark, then a commercial tube may be required to complete the build.

Do Both Tubes Use The Same Internal Parts?

Yes. No matter whether you're running a commercial or mil-spec buffer tube, the internal components -- buffer, recoil spring, bolt carrier, and buffer retainer -- remain the same. The differences in tube diameter are not great enough to warrant making custom springs and buffers. All lower receiver components fit in either tube just fine.

Summary: Which Tube is Best?

Unless you've found that special receiver that requires a commercial tube, stick with mil-spec buffer tubes. They provide too many advantages in the way of better fitment, higher strength, and more parts availability than commercial tubes and receiver combos.