One's a bunch of slats, one's a bunch of keyholes. Like the kind you'd find on those steel shelves in the garage. Which is better for all your accessories, optics, bipods, flashlights, and lasers? KeyMod or M-LOK? What are the differences? We're breaking down both.

We need to give a shout-out to The Broad Side self-defense shooting publication for some of the pictures below. Let's begin!

You'll find the measurements you need below and more importantly, we'll review an in-depth comparison the Military's own SOCOM conducted. But first, let's give a quick summary of what each system is, exactly. KeyMod is a rail system developed in 2012 by VLTOR Weapons Systems in Arizona. It was intended to replace the military's tried 'n true MIL-STD-1913 rail. You know that as the Picatinny rail, and it still remains one of the most popular -- albeit heavier, bulkier, and less comfortable -- rail systems on the market.

The KeyMod system does away with the external, raised rails and pointy edges. Instead, it's a "negative" or female rail system, where as the Picatinny rail system is positive, or male. This affords a few advantages over the ole 1913 setup. KeyMod is "open source", meaning any manufacturer in the firearm industry can freely develop handguards or rails that utilize KeyMod without having to license or pay royalties to VLTOR.

KeyMod attachments work probably exactly how you imagined they might: Specially shaped lugs, designed to provide tension when slid into the key-shaped slots, secure either a rail section or accessory directly to the handguard. In order to prevent the rail or accessory from coming loose from recoil and impacts, the slots and lugs face the muzzle. The other secret to ensuring KeyMod attachments stay in place rests in the lugs themselves. They're conical and provide additional tension when fully tightened.

The M-LOK rail system ("Modular Lock") was developed by Magpul in response to VLTOR's KeyMod system. It, too, was introduced only a few years ago, in 2014. Like KeyMod, M-LOK is a negative rail system and does not have any male connectors or rail system bits that remain on the handguard when not in use. The attaching accessories provide the male connector to M-LOK's female mounting slots. M-LOK is not open source and manufacturers are required to obtain a license from Magpul before producing equipment with this rail system.

Like KeyMod, the male connectors are affixed to whatever rail or accessory one is attaching. But unlike KeyMod's conical lugs and key-shaped holes, the M-LOK attachment method utilizes T-nuts and rectangular holes. This method of attachment doesn't rely on directional force or sheering tension. M-LOK works more similarly to Picatinny, clamping down on the rail with simple compression force.

Which Rail System is Better? 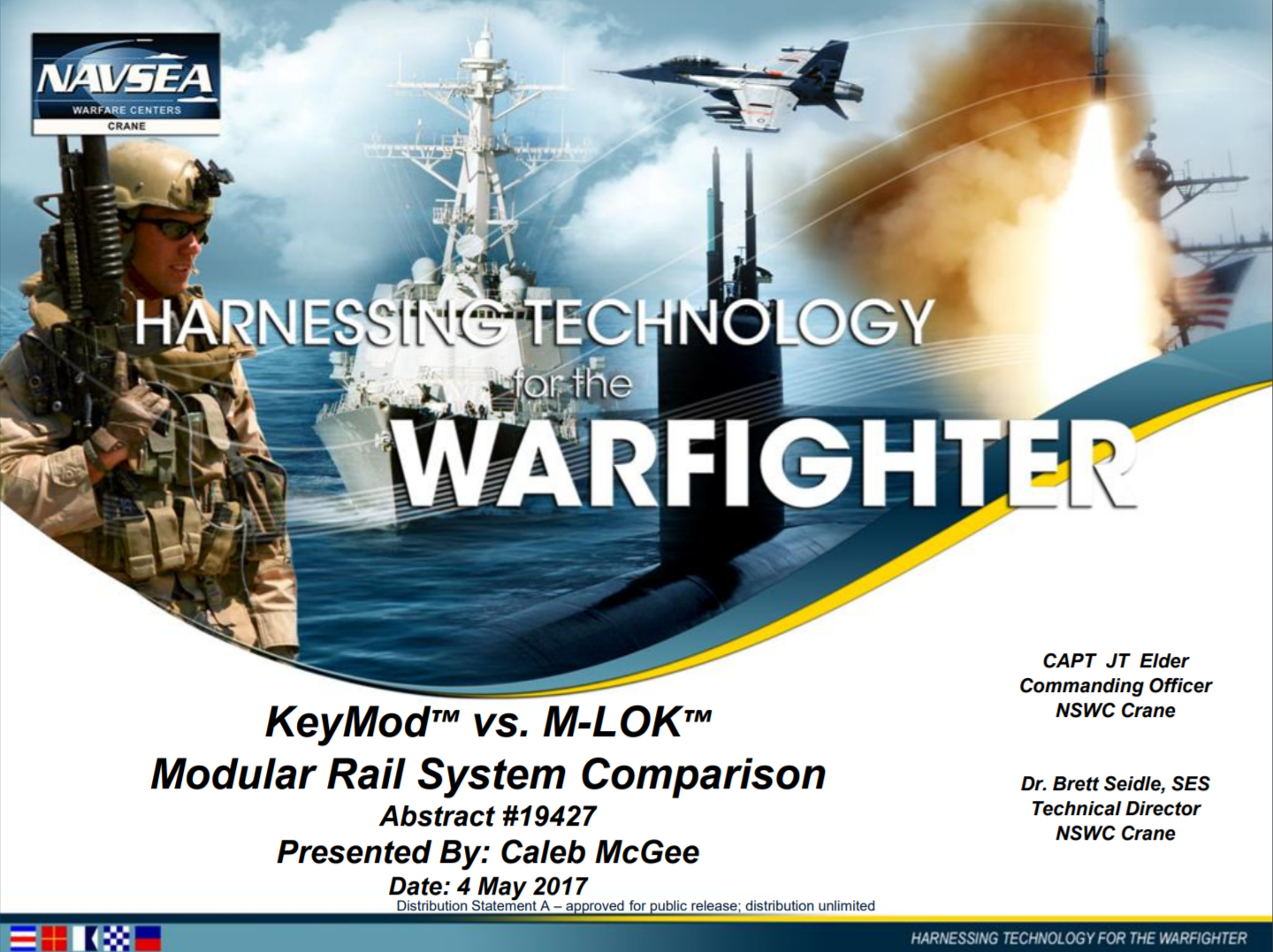 You could spend hours on gun forums and read the endless thread from gun owners arguing which rail system's better. Thankfully, USSOCOM realized the aging Picatinny rail system could do with a replacement upgrade. So, the Naval Special Warfare Command  conducted an in-depth study on both KeyMod and M-LOK.

To ensure the results from their testing was not skewed by a particular rail design or manufacturer, SOCOM used three different railed handguards from three manufacturers: Aero Precision, Midwest Industries, and Seekins.

For the test results below, the handguards are labelled as such:

SOCOM first tested repeatability, or how much point of aim remains the same on a laser sight when removed and reattached to the rail systems. They accomplished this by installing a PEQ-15 laser on both rail systems, measuring its point of aim (POA), removing it, and reinstalling it. They then measured how much POA shifted. 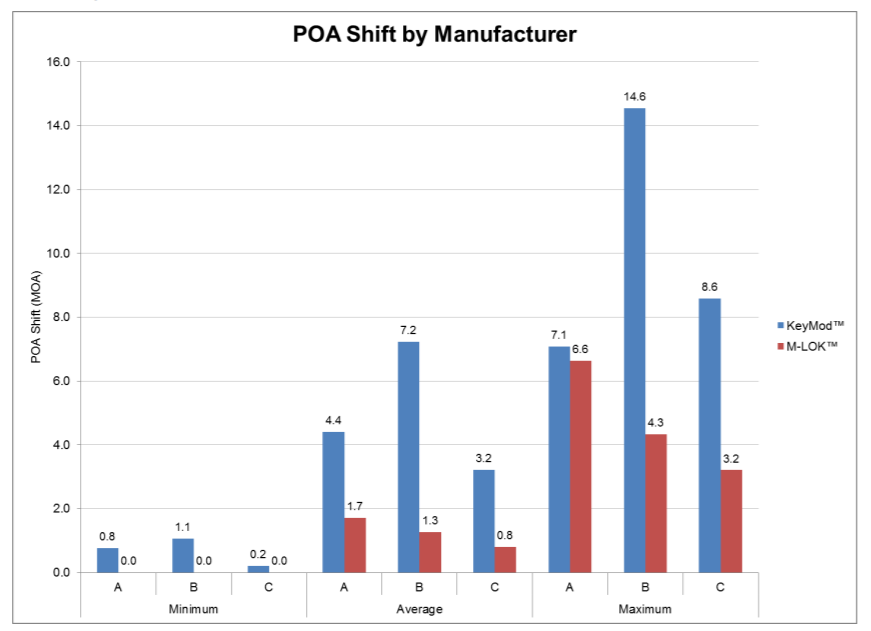 The most telling sign from this graph is the "minimum shift" comparison. KeyMod wasn't able to replicate POA exactly, and shift at least somewhat when reinstalled properly. M-LOK, when properly reinstalled, was able to maintain exact POA with no shift. M-LOK is the clear winner when it comes to removing and reattaching sights or aiming accessories without losing accuracy or having to re-zero your weapon.

To test the general reliability of both rail systems, SOCOM testers placed an M4 equipped with both rails in a simulated live fire machine. This pneumatic machine produced physical energy waves that replicated full-auto fire at a rate of 1,020 rounds per minute. Thirty-round bursts were used, separated by two-second pauses to simulate mag changes. A total of 20 iterations were conducted, simulating 10,200 rounds per handguard.

Both rail systems were able to withstand the entirety of the live-fire endurance test without any failure in attachments, mountain lugs, or the rail itself. Neither rail exhibited loose fasteners, either. The endurance test results in a tie for both rails. This is an important test because many who argue which rail is better often claim M-LOK is "more secure" than KeyMod. This test demonstrates that neither rail system has a distinct advantage over the other when properly torqued. KeyMod rails are not more likely to loosen or separate under normal use.

What about rough handling? The cyclical forces from live fire may actually provide less of a jolt to your rail system and its accessories than having your rifle or pistol bumped around or dropped. To test this, SOCOM modified the pneumatic live-fire machine to simulate sudden, jarring impacts. These tests were performed at levels of peak load starting at 200 lb. ft. gradually moving up to 400 lb. ft. 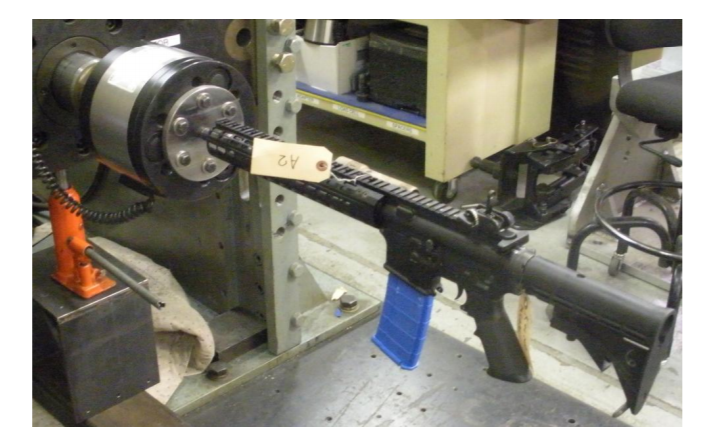 With the same weapon light and laser sight mounted in their usual positions, neither M-LOK nor KeyMod rails failed under the rough handling tests. Both systems maintained tight fixtures with no fasteners coming loose. It is, again, a tie for both rail systems. This further defeats the usual argument that one rail is capable of holding accessories or sights better than the other.

The Aero Precision KeyMod suffered no damage one drops 1, 3, and 6.

The Aero Precision suffer a loose accessory rail attachment, but the accessory (a flashlight) was still in position.

Drop 4 resulted in the rear mounting lug to be pulled through the keyhole. The handguard suffered a crack between the KeyMod slots when this occurred:

Drop 5 resulted in the the accessory rail becoming detached from the handguard, though no apparant damage was visible to either the mounting lugs or the keyholes:

Drop test #6 was not conducted for the Aero Precision. 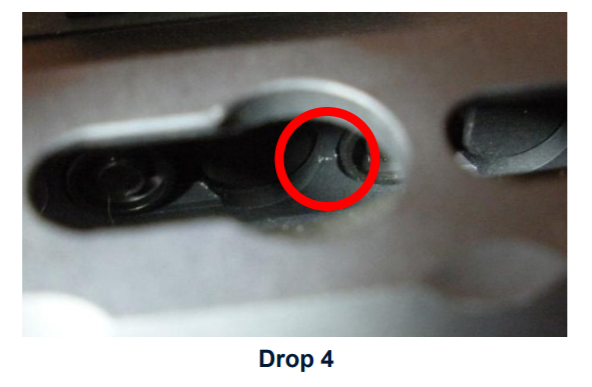 Drop 6 was conducted twice. The first drop caused total separation of the handguard from the barrel nut.

The second drop (6B, not pictured) caused the accessory attached to the keyholes atop the guard to fall off.

The attached accessory rail did not loosen or fall off, and remained in place: 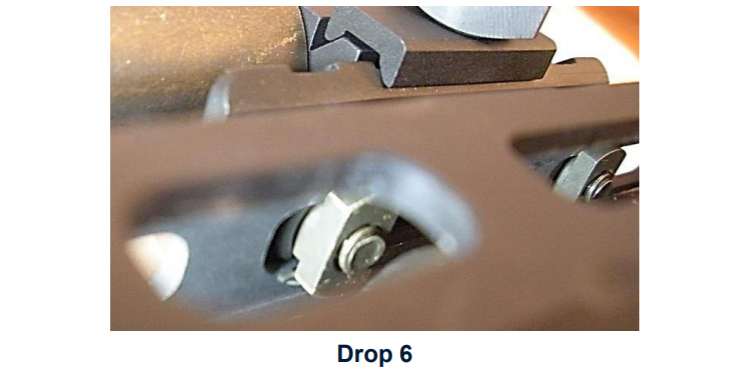 This final test was designed to determine which rail system could hold onto its attached accessories when pulled under extreme loads. Both rail systems' attached weapon lights were pulled with a metal chain until the force was great enough to destroy the attachments and separate the rail attachment from its handguard slots: 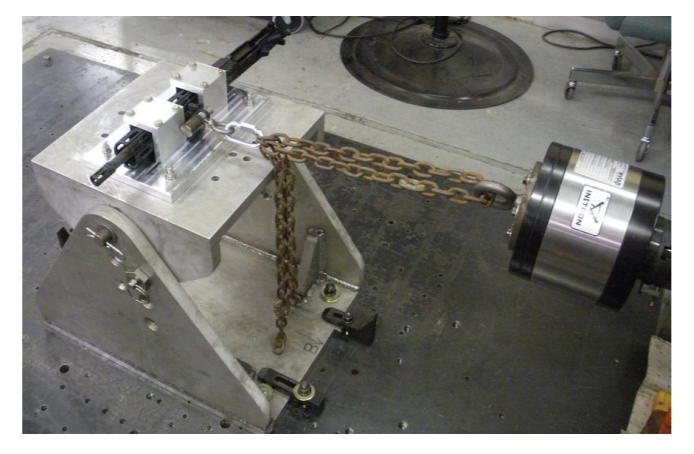 The results speak for themselves. Below, the graph illustrates the total pound-feet required to caused separation of the attached rail from the handguard's slots. All six handguards were tested until failure: 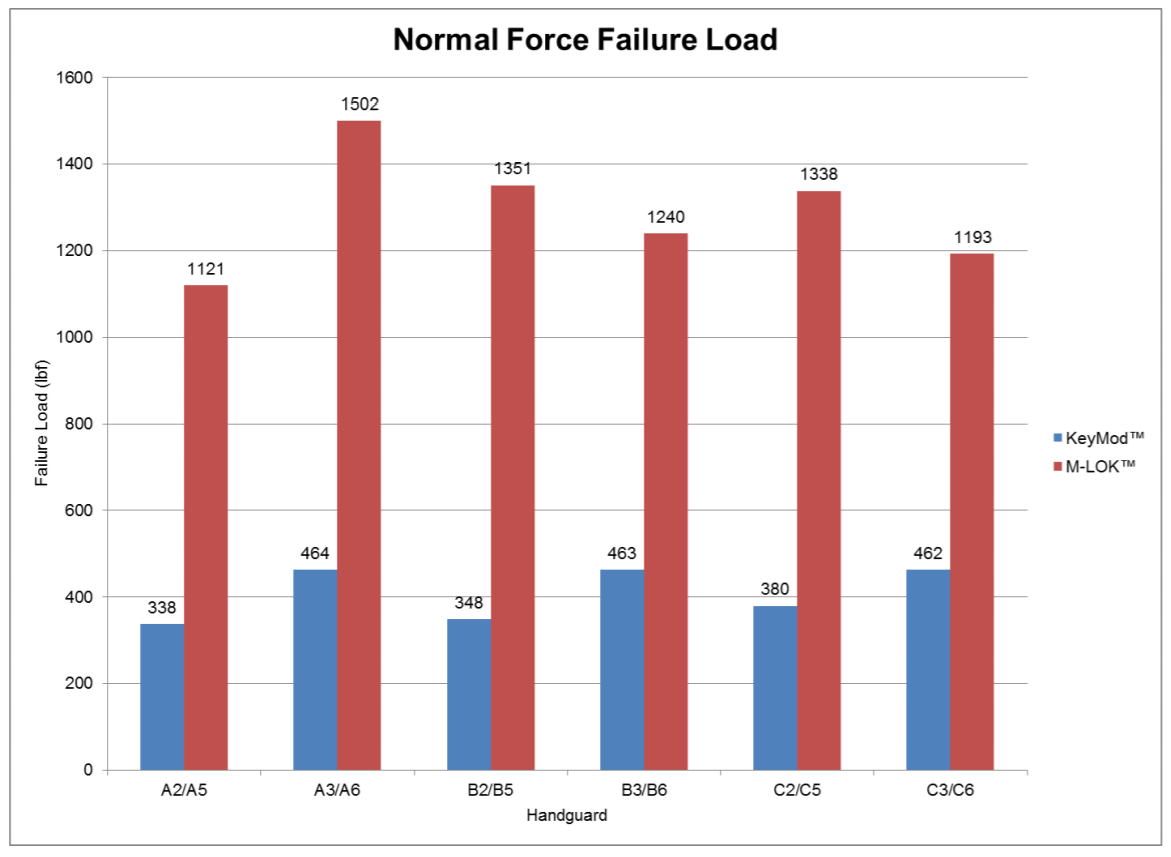 On average, M-LOK was able to withstand approximately 215% more force before failure when compared to KeyMod.

Final Summary of M-LOK vs. KeyMod: Who's The Winner?

KeyMod and M-LOK tied for endurance, with both rails passing the live-fire test.

M-LOK was again the clear winner. It was able to withstand more than 3 times the force of the average KeyMod rail system before failure.