YOUR ORDER WILL SHIP IN 1 to 3 DAYS!
Real time inventory.  No backorders.

We are a national retailer of individual components and not all products depicted on this website are legal in every state. Shipping of various products found on this website are prohibited to some states (such as California, Connecticut, Hawaii, New Jersey, New York, Pennsylvania, and Washington). The information, pictures, text or products presented on this website are not a representation by us, and should not be understood by you, that any product or completed firearm is legal to assemble or own in your state of residence. We encourage each and every builder to perform their own research about the state and federal laws that apply to them. It is your responsibility to understand the law and we encourage you to consult with an attorney or your local ATF representative.

6.5 Creedmoor has become a staple in the AR's niche-caliber community. While it first started as a match load for long-range shooting in typical bolt guns, it's earned favor as an alternative to the (what some call 'archaic') .308 Winchester that the AR platform was originally developed around. That's right: The AR-10 came before the smaller AR-15, and its decades of service has proven it to be a formidable battle rifle and DMR. But does this new 6.5mm load provide the performance needed to justify its shorter barrel life and higher price per round? Today, we're comparing 6.5 Creedmoor to .308 Winchester. 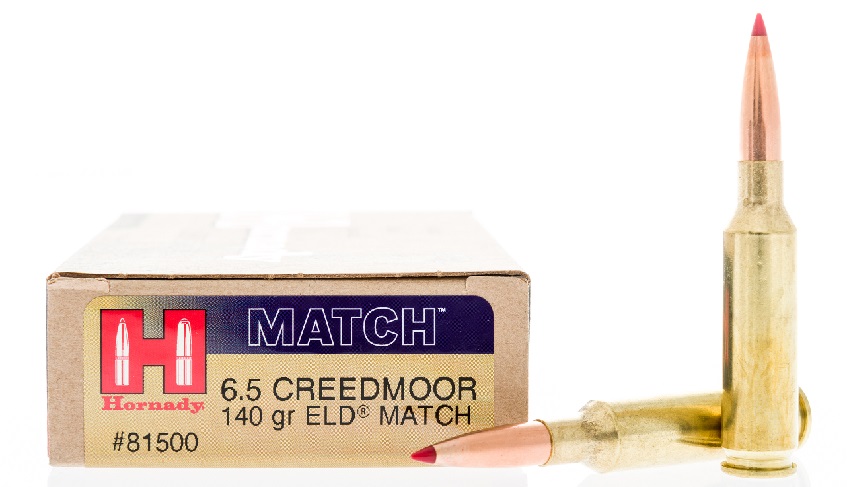 6.5 Creedmoor was developed in 2007 by Hornady for long-range and competition shooting. Two engineers - Dave Emary and Dennis DeMille - wanted to produce a 6mm cartridge that would outperform the then-popular 6mm XC, a round used at NRA matches. They also had the goal of producing a round with a higher ballistic coefficient and lower chamber pressure and recoil than .308 Winchester.

To pull this off, the pair used the .30 Thompson Center, a cousin of the .308 load, as the test vehicle. The .30 TC utilized a relatively short, wide casing with a broad 30-degree shoulder, providing plenty of room for powder and a long, stable bullet that could still fit inside a short action like the AR-10. By yielding the same chamber pressure of .308 Winchester (62,000 PSI by SAAMI specifications) with a longer and thinner (0.264") round, the 6.5 Creedmoor was quickly made capable of reaching out to 800 to 1,000 yards. 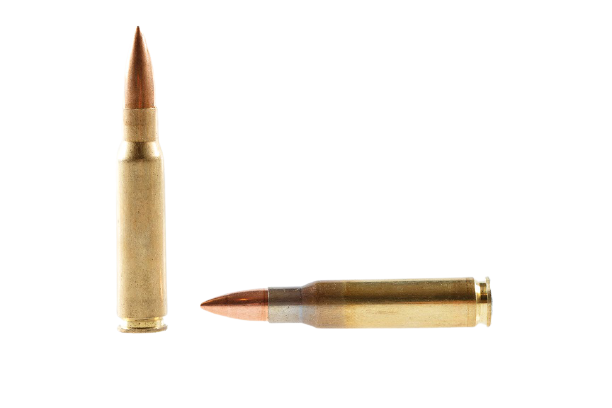 The .308 Winchester looks nearly identical to 6.5 Creedmoor, but this round predates the 6.5mm cartridge by about 50 years. The Winchester load started out as an experimental round meant to replace the big, powerful .30-06 Springfield cartridge largely credited with winning WWI and WWII. The U.S. military sought a battle rifle smaller than the M1 Garand, which was chambered .30-06. For testing, the round was chambered in the T44 experimental rifle which would become the M14. The M14 was adopted by the military as the infantry's new service rifle in 1957.

This short-action round was first configured with a 147-grain bullet providing around 2,750 feet per second of muzzle velocity with about 2,500 ft. lbs. of muzzle energy. This yielded similar performance to .30-06 with a smaller casing. NATO officially adopted the round in 1954, three years before issuing the M14. Interestingly, Winchester beat NATO and Army brass to the punch: The firm saw potential in providing this new round to civilians for hunting and introduced the 7.62x51mm round in 1952 as the .308 Winchester.

Like 5.56 NATO and .223 Remington, this .30-caliber AR load is technically not all one and the same. NATO brass is a bit thicker and commercial .308s are sometimes loaded to slightly higher pressures. Headspace between the two may also differ by about six-thousandths of an inch. The .308 Win headspace is between 1.630 and 1.6340 inches while the 7.62 NATO is between 1.6355 and 1.6405 inches. Thankfully, SAAMI (the Sporting Arms and Ammunition Manufacturers' Institute, which certifies cartridges and their max pressures) does not consider it unsafe to cross-load these two rounds in a single chamber or rifle.

In essence, we have two rounds based on similar .30-caliber loads, with identical chamber pressures. One pushes a longer and thinner bullet that runs hotter. With Creedmoor advertising capabilities at 1,000 yards or more, can the archaic, heavy .308 Winchester hold up? And what benefits might one find in sticking with the old 7.62 NATO? Let's first compare ballistic performance from muzzles to downrange.

Physically, these two cartridges are evenly matched. Winchester uses a round that is about 15% wider, with just barely more (~2%) powder to drive it downrange at comparable velocities. Both loads share the same max pressure and overall lengths are nearly identical -- an obvious requirement if they're both to fit easily in the  LR-308 platform.

The more drop experienced as distance increases, the greater the chances your groupings will be larger. With a larger, fatter round, does .308 hold up to the supposed laser trajectory of Creedmoor? Let's compare. We're looking at a 130-grain Creedmoor stacked up against 175-grain Winchester. Both cartridges come from Eagle Eye Ammo, and they contributed the data for this comparison.

Folks over at Field and Stream did a great comparison between 6.5 Creedmoor and .308 Winchester, utilizing the same 140-grain Berger VLD bullet for both casings. It advertises a muzzle velocity of 2,650 FPS, with a ballistic coefficient of .304. How do well do both loads handle this round at extreme distance?

If we crunch some maths, we find 6.5 Creedmoor retains about 12% more velocity, drops about 10% less, and drifts about 19% less with a 5 mph wind.  While velocity and bullet drop are consistent and can be compensated for, that last bit -- wind drift -- is significant, especially with 20% more resistance to drift. Of course, this is comparing two loads with one bullet.

What happens when .308 Winchester takes advantage of a larger, heavier bullet at more manageable ranges? After all, it's not just about seeing how far you can sling lead. Hunting and shorter-range competition shooting is still a thing. Let's compare a 135-grain 6.5mm with a 168-grain .308 at 500 yards.

The results get more competitive by percentage, but ballistic coefficent gives Creedmoor a distinct advantage in the wind: The 6.5mm enjoys about 7% more velocity, less than 6% less drop, but 20% less wind resistance. A difference of 2" doesn't sound like much, but wind isn't consistent. This is enough to affect your groupings to a noticeable degree, especially if you're gunning for near-MOA accuracy.

It's Not All About Creedmoor

At this point, you're probably thinking something along the lines of, "Well, 6.5 Creedmoor is clearly superior to .308 Winchester in every possible way!"

As far as real-world applications go, .308 Winchester holds plenty of advantages over the 6.5mm load. This holds especially true for the everyday marksman who's rocking an LR-308, a semiautomatic AR-type rifle that's fun to shoot and, more often than result, tends to result in quite a few rounds going downrange in a single day. Let's compare whether Creedmoor's advantages over .308 Winchester beyond, say, 500 yards is worth all its practical shortcomings.

The .308 Winchester's known for being relatively forgiving when it comes to barrel life. Even with semiautomatic fire, most shooters say acceptable long-range accuracy can be had for up to 10,000 rounds. Most shooters averaging sub-MOA accuracy report they're able to maintain tight groupings up to 4,000 to 5,000 rounds. This is most certainly not the case when it comes to 6.5 Creedmoor.

In fact, Creedmoor runs so hot that you can expect your barrel to lose that 1,000-yard laser touch at around 2,500 to 3,000 rounds. Thanks to Creedmoor's high ballistic coefficient and physical shape, accuracy can be maintained with consistency above 2,000 rounds, but shooters have reported losing up to 100 or more feet per second in velocity around this point. This will translate into noticeably more bullet drop and compensation at greater distances. Of course, heat and your rate of fire play a major factor in barrel life. If you're taking your time between shots and running your barrel relatively cool, you can squeeze out quite a bit more barrel life. Many have reported being able to approach 3,500 to 4,000 rounds.

But you may opt to shoot Creedmoor in the AR platform instead of a slow bolt gun. If that's the case, you might find yourself wearing out that barrel in surprisingly short order. Such is the cost of achieving hyper accuracy in a semiautomatic rifle with a fast round with a high ballistic coefficient.

Winchester's been a favorite among hunters and bench rifle owners for about five decades. It's produced by dozens, if not hundreds, of manufacturers and Sierra Match King and other high-end loads can be grabbed with relative affordability. As this writer compares price per round in early 2021 on Ammoseek, the cheapest .308 Winchester brass comes in at $0.90 per round. Match-grade loads come in at around $1.25 to $1.50.

The cheapest Creedmoor rounds start at $2.50 per round, climbing up to $3.50 to $4.00 for match loads. That translates into a 20-round box of 6.5mm for at least $50 to $75, compared to just $18 for a box of 20 Winchesters. When you consider that you can still find "spam cans" of 7.62 NATO to bring costs down on bulk ammo purchases, the value found in .308 is even greater. If you like to shoot often and perform the occasional mag dump, Winchester will be easy on both your barrel and your wallet. Creedmoor, not so much.

Because Creedmoor and Winchester are so similar, it's easy to find your favorite bolt gun or AR rifle for either load. In fact, 6.5 Creedmoor is specifically made to fit in the .308 AR platform without any modification, save for the barrel. It uses .308 upper and lower receivers, the same parts kit, even the same magazines. To ensure your rifle doesn't get beat up, you'll need to invest in a "high-pressure" bolt and firing pin, which our 6.5 Creedmoor AR kits come with.

You should now have a good idea of which load will better suit your shooting needs when it comes to 6.5 Creedmoor vs. 308 Winchester. Let's recap some of the most important things:

We are a national retailer of individual components and not all products depicted on this website are legal in every state. Shipping of various products found on this website are prohibited to some states (such as California, Connecticut, Hawaii, New Jersey, New York, Pennsylvania, and Washington). The information, pictures, text or products presented on this website are not a representation by us, and should not be understood by you, that any product or completed firearm is legal to assemble or own in your state of residence. We encourage each and every builder to perform their own research about the state and federal laws that apply to them. It is your responsibility to understand the law and we encourage you to consult with an attorney or your local ATF representative.