Thanks to easy customization and the invention of the pistol brace, the AR-15 pistol has become a popular alternative to building or buying a traditional rifle. Many also build AR pistols as an affordable alternative to owning a short-barreled rifle (SBR), an NFA firearm that requires extra paperwork, fingerprints, and an expensive $200 tax stamp. This guide covers the differences between the AR pistol, rifle, and SBR, and we'll cover the various build options and calibers.

DISCLAIMER: Laws change frequently and we're not lawyers. This guide is not legal advice. Always double-check firearm laws yourself, and consult with an attorney if you're ever unsure. Some states have banned 80% lowers and certain firearm parts, or have otherwise restricted the sale and ownership of products we sell. So, be sure to check your local and state laws. We can’t ship our products to certain states. Please check our Shipping & Return Policy before placing an order (see restrictions).

What is the minimum barrel length of an AR-15 rifle?

The minimum barrel length of any rifle is 16". A firearm equipped with a buttstock and barrel shorter than 16" is considered a short-barreled rifle, an NFA item. ( ATF source, section 2.1.3)

What does the ATF consider a rifle to be?

A rifle is a firearm designed to be fired from the shoulder and designed to use the energy of an explosive in a fixed cartridge to fire only a single projectile through a rifled barrel for each single pull of the trigger. ( ATF source, section 2.1.3)

What does the ATF consider a pistol to be?

The term “Pistol” means a weapon originally designed, made, and intended to fire a projectile (bullet) from one or more barrels when held in one hand, and having a chamber as an integral part of, or permanently aligned with, the bore, and a short stock designed to be gripped by one hand at an angle to and extending below the line of the bores. ( ATF source 18 U.S.C., § 921(A)(29) and 27 CFR § 478.11)

Can my AR pistol have a buttstock?

Are pistol braces legal? Can they be shouldered?

Yes. In fact, we wrote an  entire guide detailing pistol braces and the ATF's flip-flopping on this question.

Can I convert my assembled AR-15 rifle into a pistol?

No. it is illegal under to convert a rifle into a pistol. Doing so would constitute making an SBR instead, even if you've removed the buttstock and configured the weapon to meet the definition of a pistol. ( ATF source)

How can I legally build an AR-15 pistol?

You must use a stripped lower receiver or finished 80% lower -- the firearm component of the AR-15 -- to build your AR pistol. The ATF also states that you can use a "rifle receiver" to build a pistol as long as the receiver has never been transferred via FFL or configured as a rifle. ( ATF letter)

Can my AR pistol have any length barrel?

Yes. There is no minimum requirement for barrel length on any pistol. This only applies to rifles.

Can my AR pistol be any total length?

Yes. There are no minimum overall lengths your pistol must be. If you're building your pistol with a conventional set of receivers and buffer tube, it will likely measure at least 15.5" before adding a barrel.

Can I use any buffer tube on my AR pistol?

Yes. There are buffer tubes advertised as "pistol buffer tubes", but they're simply "slick" tubes with no dimples or cut-outs for securing a buttstock. Depending on the pistol brace you may install, a slick tube may be required, though other pistol braces use a regular carbine tube. Using a standard carbine buffer tube that you'd find on an AR-15 rifle is not illegal, as long as you don't install a buttstock. The ATF has confirmed this is legal. ( ATF letter)

Can I install a vertical foregrip on my pistol?

No. The ATF categorizes this type of weapon as an "Any Other Weapon" or AOW. The ATF says that by adding a vertical foregrip to a firearm, that firearm is no longer designed to be fired from a single hand. Therefor, it is no longer considered a pistol. An AOW is considered an NFA item like an SBR. ( ATF source)

Can I install an angled foregrip on my pistol?

The ATF received an inquiry from an AR pistol owner asking this very question. They stuck to their definitions quite literally, and said that since an angled foregrip is not a vertical foregrip, installing one on your pistol would not constitute the making of an AOW. ( ATF letters)

Summary: Pistol vs. Rifle vs. SBR 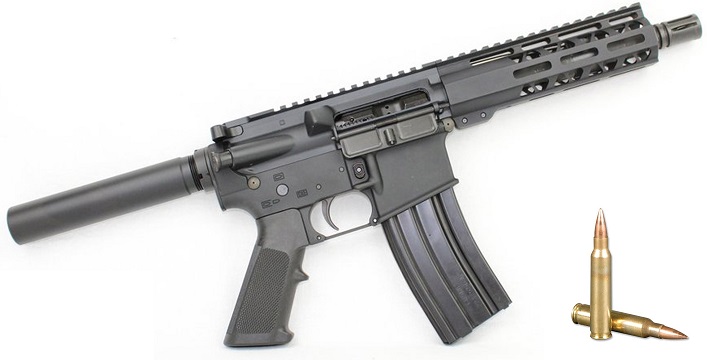 It's well-established the AR-15 rifle's optimal barrel length is 16". This is the shortest legal length that affords the greatest velocity. Ballistics data also say that increasing barrel length beyond 16 inches for the 5.56 NATO and .223 Remington cartridges yields only marginal increases in velocity. Highlighted in green, the optimal velocity with a 16" barrel is achieved at 2,992 FPS. Increasing barrel length to 17" actually decreases velocity by 20 FPS. 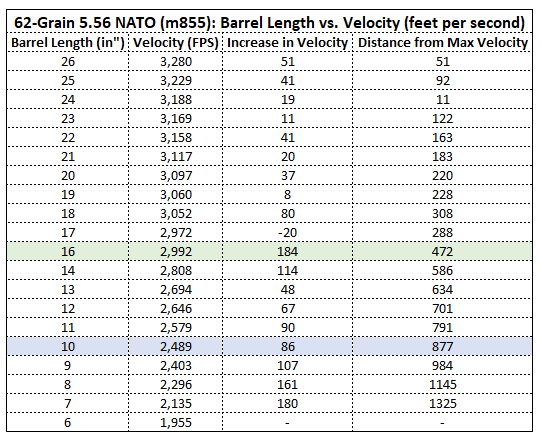 What's the optimal barrel length for an AR pistol?

Extensive testing found the M855 projectile (62-grain 5.56 NATO) needs to be traveling at approximately 2,500 FPS to achieve full lethality. Velocities lower than 2,500 FPS would require additional direct hits on a threat to eliminate it. Referencing the ballistic chart, we find that a 10" barrel provides 2,489 FPS.

Yes. The misconception that barrel length dictates accuracy is widespread. Barrel length only increases velocity. It is a combination of velocity, twist rate, and manufacturing quality that determine how accurate your firearm is, and to what distance. Shooters who own AR-15 pistols with barrels as short at 7.5" report favorable accuracy at 100 yards or more.

Both 5.56 and .223 will benefit from being fired with a 1:7 or 1:8 twist rate in an AR pistol with a short barrel. These twist rates will help to compensate for lower velocity, adding stability and improving accuracy.

This one's simple: You need a pistol-length gas system, of course. Shorter barrels mean your typical 5.56 or .223 cartridge won't burn all its powder. That means less gas energy to cycle the bolt, so the shortest possible gas system is required to make your pistol reliable. 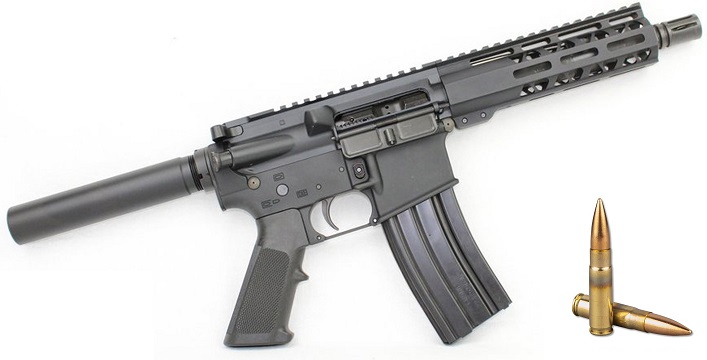 300 Blackout is a top choice in cartridge if you're building an AR pistol. This round was designed to burn its powder quickly in shorter barrels in order to achieve high velocity with great accuracy in a compact gun. Its subsonic load is equally perfect for a short-barreled weapon as well, affording plenty of power, lethality, and accuracy within 150 yards. Let's review the velocities for the common supersonic 300 Blackout load:

The answer is 9". We cover why that's the case in the 300 blackout guide linked below. 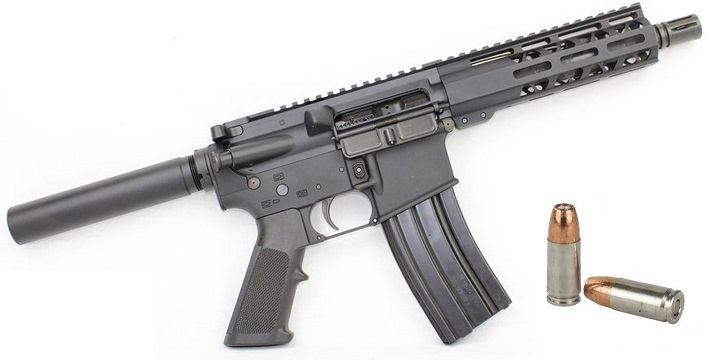 The AR pistol configuration truly shines with a handgun cartridge like the 9mm. Originally designed for, well, handguns, 9mm Parabellum affords 100-yard accuracy with a barrel as short as 4 inches. Configuring your AR pistol with this cartridge will net exceptional power and accuracy beyond 150 to 200 yards. Here's the optimal setup.

Twelve inches will get you maximum velocity and serious impact energy, though you'll be just as happy with a barrel as short as 5" or 6".

No matter the bullet or barrel, a 1:10 twist rate is the only twist rate you should use for 9mm.

We are a national retailer of individual components and not all products depicted on this website are legal in every state. Shipping of various products found on this website are prohibited to some states (such as California, Connecticut, District of Columbia, New Jersey, New York, Pennsylvania, and Washington). The information, pictures, text or products presented on this website are not a representation by us, and should not be understood by you, that any product or completed firearm is legal to assemble or own in your state of residence. We encourage each and every builder to perform their own research about the state and federal laws that apply to them. It is your responsibility to understand the law and we encourage you to consult with an attorney or your local ATF representative.