In this guide, we're breaking down  everything you want to know about good ole' 5.56 NATO, the round most used by the military and the AR-15 market.

Let's figure out what all these different 5.56 rounds do, what their names mean, and what it all means for you. First, we'll review each type of round. Then we'll compare them.

The 5.56 x 45mm NATO cartridge is a .22-caliber rifle cartridge designed for military use in the late 1970s by FN Herstal. The round itself is based on Remington's hugely popular .223 Remington cartridge, which was developed in 1957 for the original ArmaLite-15 (AR-15) rifle and eventually, the M16 service rifle in 1964.

Unhappy with the performance of .223 Remington, top brass in the military (no pun intended) ordered the round to be redesigned to offer better penetration against armor and hard targets at long range. The round was refitted with a 62-grain FMJ bullet that houses a 7-grain steel core penetrator, and thus 5.56 NATO was officially born in October 1980. 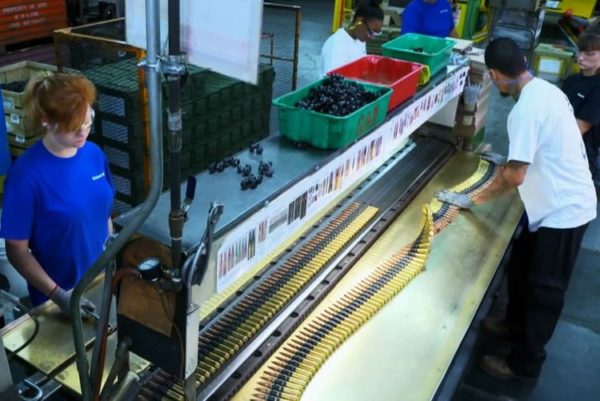 The plant itself is owned by the U.S. military and maintained by Northrop Grumman. It produces munitions for branches of the service and the civilian ammo market. This U.S plant is the largest producer of 5.56 NATO ammunition, which is owned and sold by Federal American Eagle.

American Eagle 5.56 ammo comes in a few types of packaging:

All this ammo is the same.

Even though the packaging varies in shape, color, and design, all Federal American Eagle 5.56 brass is produced as first-run ammo at Lake City.

The M193 cartridge is considered the original military 5.56 round. It was first developed way back in 1964 for the M16, when the round itself was still officially ".223 Remington". It pushes a 55-grain bullet with a full metal jacket and nothing special hidden inside. No markings on the bullet or casing, no fancy steel cores or other effects. The primer and case mouth are both sealed to lock out moisture, an important feature for any military ammo. This lighter-grain round favors a slower twist rate, usually 1:8 to 1:10.

The SS109 / M855 cartridge has two names, but it's one in the same. The NATO designation for this round is SS109. The U.S. Military's designation is M855. The SS109 designation comes from Belgium, where FN Herstal is located. FN is the company that developed the SS109 cartridge before the U.S. Military adopted it. This round gets its "green tip" nickname from the actual painted green tip which identifies it as a steel core penetrator. Now you know!

Either way, this armor-piercing round was developed to attack hard targets more effectively. This ammo can penetrate up to 3 millimeters (0.12") of steel at 600 meters. Other ballistic data says this round can even go through up to 12 mm (0.47") of hot-rolled steel armor at 100 meters.

M855 ammo provides poorer performance against soft targets when compared to M193. While it has better armor-penetrating ability, M855 is more likely to pass through a soft target rather than yaw and fracture in soft tissue, causing extensive damage. It also has a shorter maximum effective range. It largely falls off its flight path after 300 meters, compared to M193's 440 meters.

Curious what all the "M"s and "X"s means? Simple: The "M" in M193 and M855 stands for "military". This denotes the ammunition is produced to military specifications. When you're shopping around for ammo, you may or may not see 5.56 NATO listed as M855 or M193, even if it's Federal American Eagle. It might say XM855 and XM193.

We even called Federal Premium to confirm this. Federal says that some "M" munitions are placed on the civilian ("XM") manufacturing line for insignificant reasons: They produced too much "M" ammo and need to sell through it, the paint on a green-tip is too thick or thin, there is extra sealant around the primer, or some other reason that  in no way hurts the performance of the ammo in question.

Whether you buy XM or M, rest assured that your 5.56 ammo will perform to the same standards. 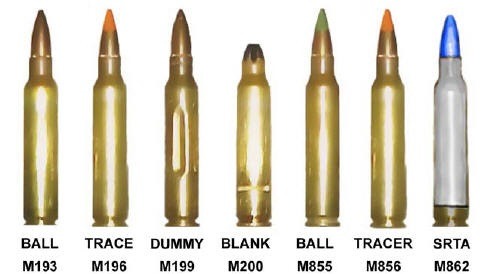 M855 and M193 are just two common rounds. There are quite a few other types of cartridges developed for the military:

The M196 usually has an orange or red tip, denoting that it is a tracer round. Tracer rounds burn a chemical compound (usually found in fireworks) that's glued to the back end of the bullet itself, creating a bright trail in its wake. Most magazines load a tracer every 3 to 4 rounds.

The M199 dummy round is an insert, used for dry-fire training. Dummy rounds have six indents on the sides of the shell casing to denote that it is a dummy round with no powder inside. The primer is removed so the firing pin can pass through safely with each dry-fire.

The M200 is a functional shell casing with gunpowder loaded inside. At the business end, the casing is crimped with no bullet in place. The crimping allows appropriate pressure to build in the chamber and barrel in absence of a live round, allowing the rifle or pistol to cycle as if it were firing a live round.

Contrary to believe, the M856 does not have a steel core penetrator like the M855. The M856 is merely an extended tracer round with a 63-grain bullet.

The M862 short-range training ammo, or SRTA, allows for live-fire indoors where rifle ammunition would not normally be allowed. This ammo can be used to train at distances of 25 meters or less. Importantly, many AR-15 owners and military service members zero their rifles for 100 meters, at 25 meters. You should not use SRTA ammo to do this, even though the firing distance is the same. Ballistics for the M862 round are wildly different compared to M855 and M193, and doing this will result in an inaccurate zero.

Federal 5.56 NATO ammo is produced for the military and the civilian market at the Lake City Ammo Plant, which is ran by the U.S Military. Service-issued ammunition is labeled as "M855" (steel-core penetrator) or "M193" (conventional ball ammo). The civilian equivalents to these rounds are labeled "XM855" and "XM193". Federal Premium says the quality and consistency of both labels are the exact same, and both lines of ammo are produced at the same manufacturing facility, using the same methods and processes.