The AR-15 platform's lower receiver is relatively standardized. Opportunity to customize your build truly begins with the stripped upper receiver, and the parts you install on it. This guide covers the various types of stripped uppers available for your build, the history of past receivers not frequently seen today in the market, and the various types of features you can pick from to help complete your build.

Let's take a look at the stripped uppers from oldest to newest, and note each feature present (or lacking). 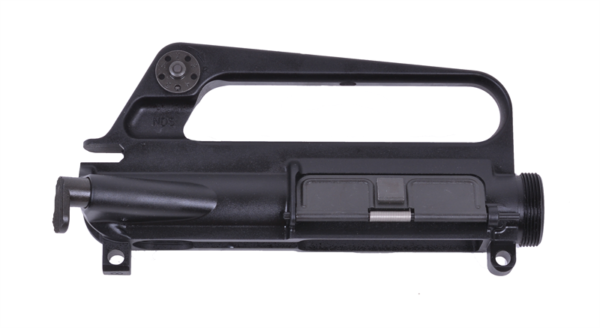 Eugene Stoner's original ArmaLite AR-10 Rifle, introduced in 1956, was fitted with an early version of the M16A1-type upper receiver. This classic profile is most often recognized by its integrated rear sight aperture and carry handle. The original AR-type upper did not have a forward assist nor a cut-out for the modern, rear-facing charging handle. Instead, the very first upper was designed to accommodate the charging handle inside the carry handle: 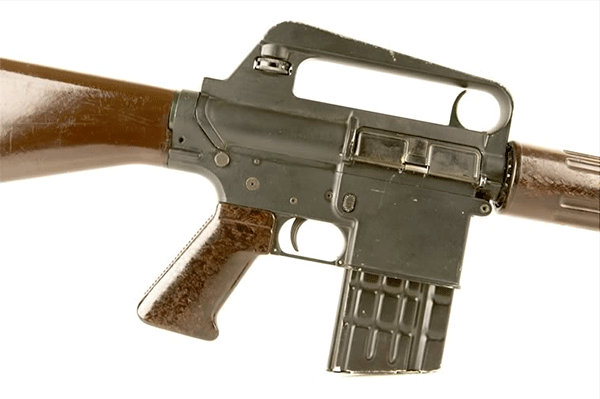 When the U.S Army asked ArmaLite to develop the AR-15, the design was updated, moving the the charging handle to the rear of the receiver. The forward assist was also added to ensure the bolt could be forced into battery should the receiver get dirty or "gunked up" in the field. The windage knob for the rear sight was also redesigned to rest flush against the carry handle, rather than protrude as a horizontal finger wheel. The rear sight included two apertures: 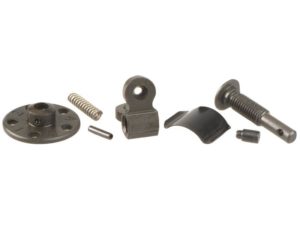 Mounting an A1 Optic

While the A1 upper doesn't have a modern rail system, it still allows for the installation of optics and scopes: A center-drilled hole inside the carry handle acts as a singular mounting point for a basic scope mount or a modern Picatinny rail: 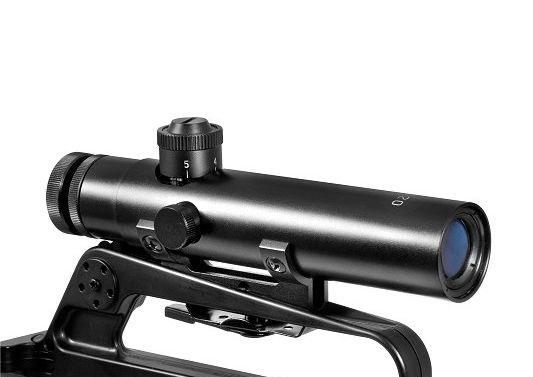 This attachment system is popular among builders who want to replicate the  CAR-15 XM177, a short-barreled variant of the A1 rifle (introduced in 1966 for American Special Forces) dubbed the "Commando". The A2 upper was also the first receiver to be used on the M4 carbine, dubbed the XM4 in development, introduced in 1984. 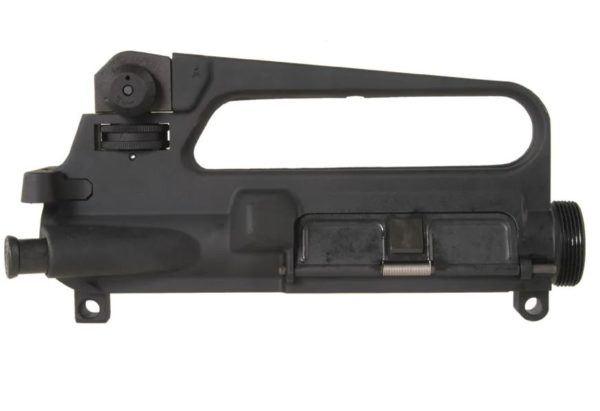 The M16A2 represented an improvement over the A1's finicky Vietnam-era design. With it came an updated stripped upper receiver. Although the carry handle and general profile remained the same as the A1 rifle, the A2 upper once again changed the rear sight aperture with a more robust and distance-adjustable assembly: 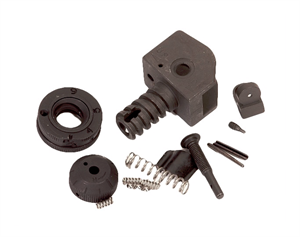 The horizontal finger wheel returned for windage adjustments, and the aperture could be raised or lowered with a side-mounted elevation knob to accommodate specific shooting distances, up to 800 yards. A shell casing deflector was added just behind the ejection port to reduce interference and injury to the shooter from spent brass.

The M16A3 is a modified version of the M16A2, produced in small numbers and primarily issued to members of the SEALs, Seabees, and security units. The trigger assembly was modified in the A3 to provide full-auto fire. All other components -- including the A2-style upper -- remained the same. 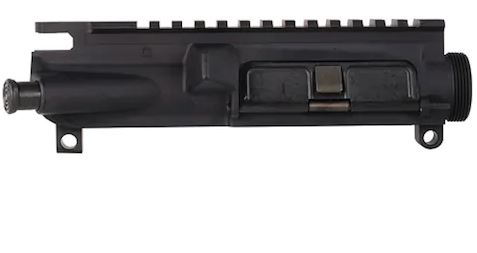 The A4 stripped upper is ubiquitous with the modern AR-15. Nearly every retail rifle, SBR, or pistol (as well as nearly all pre-built, barreled upper assemblies) are offered with the modern A4-type stripped receiver. Commonly called a "flattop" or "M4" upper (referencing the modern M4, not the older A2 variant), this receiver allows builders and shooters to install any iron sight, optic, or scope of their choice. The rail system featured on the A4 upper is a typical Picatinny/M1913 rail, standard for all mil-spec attachments, and most commercially-available accessories. The A4/M4 receiver also affords greater reliability with a wide range of ammunition: It features the popular "M4 feed ramp" cuts to ensure reliable feeding and cycling: 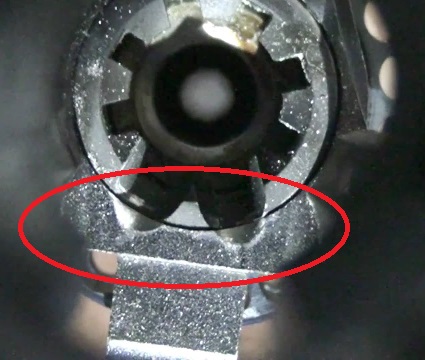 *Some units ship without a forward assist to save weight and costs. These are often called "slick-side" uppers: 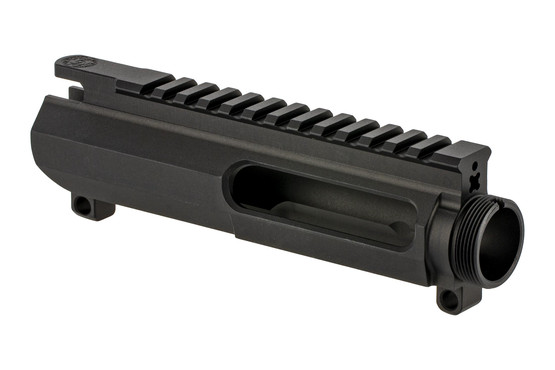 *Both of these "old-school" features can be added to the modern A4 upper receiver via the Picatinny rail system:

The AR-10 and its bigger .308 cartridge still earns favor among many AR builders, largely thanks to the development of a more widely-known platform, the DPMS LR-308. This alternative to ArmaLite's design is less expensive, works with many AR-15 parts and other .308 components, and includes a parts market which offers many pre-built, barreled upper assemblies. Let's take a look at the various types of .308 AR uppers, and discuss their compatibility (or lack therof) with each other:

The AR-10 and SR-25 are similar rifles that share the same caliber and some components. The AR-10 is still produced by ArmaLite and is available to civilians and the military. The SR-25 was designed by Eugene Stoner but is produced by Knights Armament Company, who primarily cater to military customers. Both rifles share the same stripped upper receiver shown above. While many parts designed for the AR-10 and SR-25 work together, the same cannot be said for interchangeability with the commercially-popular LR-308 rifle platform developed by DPMS:

When most AR builders say they're "building an AR-10", they're really referring to the LR-308 platform. For all intents and purposes, the LR-308 is, functionally, an AR-10 (minus the ArmaLite engraving). It uses the same direct-impingement gas function and outwardly appears the same:

However, the LR-308 requires certain components be sized and shaped to fit both upper and lower receivers. Taking a closer look above, the circled area at the rear of the DPMS receiver illustrates the physical difference between its shape, and that of the AR-10's and SR-25's upper receiver. It is this difference in shape (among other minor differences in components) that generally prohibit a DPMS-pattern rifle upper or lower from working with an AR-10/SR-25 upper or lower, and vice versa.

Made popular by the rise of the pistol-caliber carbine (PCC), the AR9 receiver is a proprietary and relatively new stripped upper specifically designed to mirror the AR-15 platform in physical form, while affording builders the opportunity to build a compact AR-type rifle (or pistol) chambered in 9mm Parabellum. Few others like it are chambered in .45 ACP, though that platform is often called the "AR-45". This simplified version of the AR-15 receiver is physically shorter, lacks a forward assist, and requires no port or mechanisms for accommodating the usual direct-impingement gas system. Since the 9mm cartridge operates primarily using blow-back, this same recoil energy is used to cycle the bolt and provide semiautomatic fire in the AR9.