A sling makes carrying your AR-15 easier. It allows for quickly switching from your rifle to a sidearm, too. But most of all, a good sling is a valuable shooting aid. It improves accuracy and stability without a bench or shooting rest. With the right sling, you'll nail shot placement and reduce felt recoil and muzzle rise. This guide breaks down the AR's sling mounts, materials, features to consider, types of slings, and how to use one while carrying and shooting. This writer's recommendations are based on range time and backwoods stints, and eight years humping around various rifles in uniform.

Folks call these things studs, swivels, QD mounts, attachments, and hooks. They're all the same thing: Sling mounts. Sling mounts are either fixed or swivel. They install as a fixed (permanent or requiring tools to remove) or quick-detach mount.

Quick-detach mounts typically use a small button and four ball bearings to connect and disconnect. This uses the same principle as as sockets and a ratchet wrench. Standard sling mounts will typically use pins or direct-to-rail fasteners made for the rail type (Picatinny, M-Lok, or Keymod). 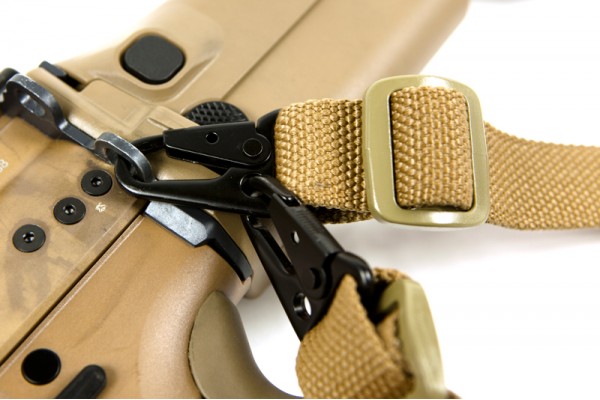 The most universal sling mount (some argue it's the best) is the HK Snap Hook. It'll snap onto any loop or fastener that's wide enough. It works like a carabiner, with a spring-loaded snap guard that prevents the hook from coming loose. The hook can be used on anything from an AR's FSB to a buttstock, most types of sling mounts, and most latch plates. It offers swivel movement and works with any nylon sling. The HK hook is this writer's sling mount of choice.

Sling material matters just as much as the number of attachments and the sling's design. Some materials have stretch while others are semi-rigid. Each material provides advantages and disadvantages.

Nylon is the most common material you'll find on a modern sling, especially if it's made for an AR-15. Nylon is a favorite because it has zero stretch or give. If you're trying to size up your sling just right for rock-solid support while shooting, nylon is a great choice. Because it's a thin and cloth-like material, nylon provides the most pliable and lightest sling. It's one of the strongest materials and it's affordable. A small strip of nylon is capable of holding hundreds of pounds without fraying or tearing. Because of its strength and tight weave, a nylon sling makes a great back-up tourniquet.

Leather is the original material used for making rifle slings. Leather provides the most padding and surface area, and it's favored among shooters handling larger calibers. Although typically not as finely adjustable as nylon, leather slings provide the most support when shooting. You'll find leather slings on AR-type rifles but they're mostly used on bolt guns, bench rifles, and for hunting.

Neoprene is never used as the only material in a sling. You'll find this material used in leather and nylon to provide added padding, comfort, and stretch. Neoprene's elasticity can help add tension and stability to a sling hold while shooting and it does a great job of damping your rifle while walking and traveling.

Paracord has made its way into the sling world, made popular in recent years by its entrance to the prepper and survivalism community. Paracord is normally used as the rigging and lines for U.S Military airborne units' parachutes. This braided fabric is one of the strongest types of nylon. A single strand is capable of holding up to 1,000 pounds of static weight. These braided slings are favorites among woodsmen and preppers because when unraveled, they provide a few hundred feet of Paracord. This can be incredibly useful in an emergency for fastening traps, fishing, storing food, and creating an improvised shelter.

The type of sling you pick will determine how you carry your rifle and how you create sling holds for improving sight picture and shot placement. There are five widely used types of rifle slings. 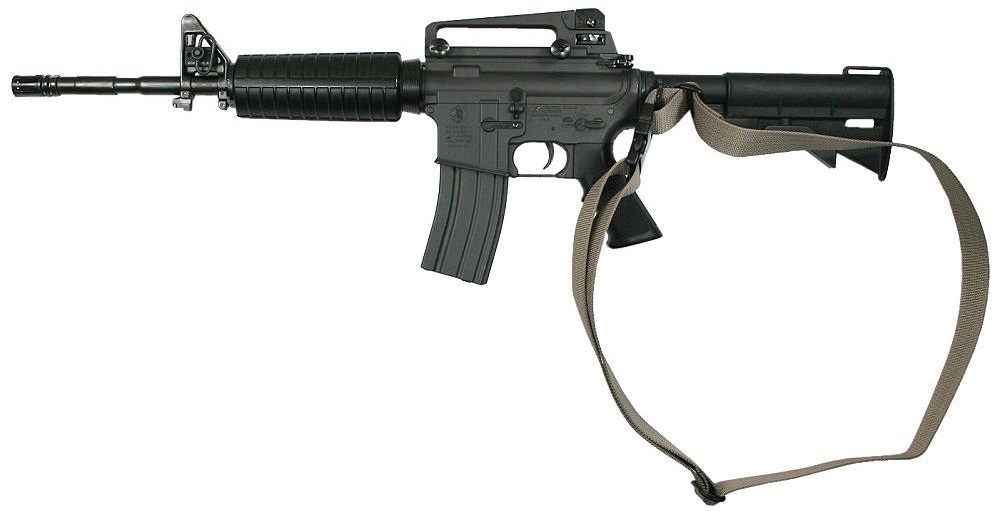 The single-point sling is the simplest of the bunch. It's the most universal and works with practically any rifle, SBR, or pistol and it sizes up for any shooter, large or small, without issue. It's the most affordable thanks to its design. This sling loops over the shoulder of your shooting arm, and under the armpit of the supporting arm.

Since it attaches at just one point on the rifle, usually near the buffer tube housing, the single-point sling isn't affected by the length of your AR's adjustable buttstock. Sized up correctly, this sling keeps your rifle hanging right by your shooting shoulder so it's easy to go from hands free to the high-ready in a hurry. It doesn't attach near the handguard or muzzle, so it can't get tangled up or caught on any accessories, like a bipod or tactical light. The single-point sling is the easiest to use and offers the most freedom of movement, making it a favorite among AR owners.

The two-point sling is the original rifle sling first used by the world's first marksmen. The 2-point sling provides various easy methods for carrying your rifle. It's also the most versatile when used as a shooting aid.

The American Carry's been made famous by so many wartime films. This carry requires slinging the rifle behind the nonfiring shoulder, with the muzzle up.

Slung over the front of the shoulder with the muzzle up, the European Carry is an "old-school tactical" carry. This method uses the sling to create tension and stability between the rifle and shooter. 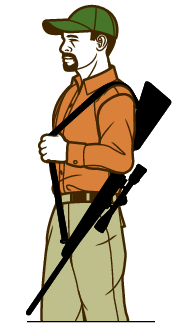 With the rifle slung over the back of the shoulder, muzzle down, the African Carry is designed to provide the quickest transition into a shooting stance from a carrying position.

Also called the USGI Sling or Loop Sling, the Hasty Sling is made by detaching the rearward point of the sling from the rifle's buttstock and loosening the length-adjusting buckle to fit the supporting arm through. The Hasty Sling is demonstrated below:

This provides tension against the muzzle end of the rifle, improving stability and shot placement when standing or crouched.

The three-point sling is the latest sling to hit the market. It was designed exclusively for shorter carbines and tactical rifles like the AR-15. This sling is meant to facilitate a quick transition to the high-ready from a low-ready or patrol carry. It also provides better comfort than a single- and two-point sling. Lastly, it offers different carry methods with one or no hand on the rifle.

By providing so many carry methods, the three-point sling works for military and security personnel who may be tasked with different operations that require carrying one's rifle a particular way. The three-point sling works with plate carriers, various rifle accessories and attachments, and it provides stability when the rifle is slung hands-free.