California is one of the most restrictive states when it comes to gun rights. The state's laws have widely targeted the AR-15 as an "assault weapon." Yet the modern black rifle's arguably the most popular firearm now owned by Americans, and it's often the platform of choice when shooters choose to build a custom rifle. This guide covers how to build a California compliant AR15. We'll also review the parts and accessories you cannot legally install on your new rifle.

California relies on  Senate Bill 23 (Assault Weapon Characteristics) to determine whether certain variants of the AR-15 and other weapons are considered assault weapons.

1.) A semiautomatic, centerfire rifle that has the capacity to accept a detachable magazine and any one of the following:

2.) A semiautomatic, centerfire rifle that has a fixed magazine with the capacity to accept more than 10 rounds.

3.) A semiautomatic, centerfire rifle that has an overall length of less than 30 inches.

4.) A semiautomatic pistol that has the capacity to accept a detachable magazine and any one of the following:

5.) A semiautomatic pistol with a fixed magazine that has the capacity to accept more than 10 rounds.

6.) A semiautomatic shotgun that has both of the following:

7.) A semiautomatic shotgun that has the ability to accept a detachable magazine.

8.) Any shotgun with a revolving cylinder.

What These Definitions Mean For Your AR-15

To avoid building an assault weapon in California as defined by S.B. 23, you have to build your AR-15 so that it either:

1. Uses a 10-round magazine that's permanently attached to the receiver, so you can have other features, or

2. Uses detachable magazines greater than 10 rounds in capacity, but does not have any of these features:

Option 2 is called a "featureless AR15." Let's review how, exactly, you would build your AR using both options.

Option 1: California-Compliant With a Fixed Magazine

Using a fixed-magazine adapter and a 10-round magazine permanently installed in the lower receiver, your AR-15 will be California-compliant even with all those features installed that are otherwise banned under S.B. 23. With this configuration, your AR wouldn't meet any of the state's definitions for an assault weapon.

Under California's  S.B. 880 Bill, a fixed magazine is defined as "an ammunition feeding device contained in, or permanently attached to, a firearm in such a manner that the device cannot be removed without disassembly of the firearm action."

For the AR-15 platform, having to separate the upper and lower receivers to remove the magazine constitutes disassembly.  This is what California's legislature says:

“Disassembly of the firearm action” means the fire control assembly is detached from the action in such a way that the action has been interrupted and will not function. For example, disassembling the action on a two part receiver, like that on an AR-15 style firearm, would require the rear take down pin to be removed, the upper receiver lifted upwards and away from the lower receiver using the front pivot pin as the fulcrum, before the magazine may be removed.

So, fixed-magazine conversions do exactly that: They drop the magazine from the magazine well only when you pull the rear takedown pin, separating the upper and lower receivers. To assist with faster reloads, most kits include a new takedown pin with a pull tab. Some kits require you to press a custom magazine release button, while others automatically drop the mag once the receivers are separated. You then insert a fresh magazine, close the receivers, chamber a new round, and you're ready to fire. These kits render the regular magazine release button on the side of the receiver inoperable.

What about bullet buttons?

When S.B. 23 was passed and the fixed-magazine option became popular among AR builders who wanted to retain their rifles' features, some AR manufacturers simply modified the factory magazine release button. The modification rendered the button more difficult to use. Instead of simply pressing the button to release a magazine, one had to use a small punch or tool to press a button recessed inside the original button.

California's lawmakers passed Penal Code 30900(b) in 2017. This code was effectively a bullet button ban. It stated that on July 1st 2018, ARs equipped with bullet buttons would no longer be considered California compliant, "fixed-magazine" weapons and would instead be reclassified as assault weapons. Bullet buttons can no longer be used to make your AR's magazines permanently fixed under the state's laws.

What a beauty. That's a featureless AR15, according to California's assault weapon laws. It can use a detachable magazine, but it doesn't have all those supposedly scary features that make such a rifle more dangerous.

Parts Not Allowed on Featureless Rifles 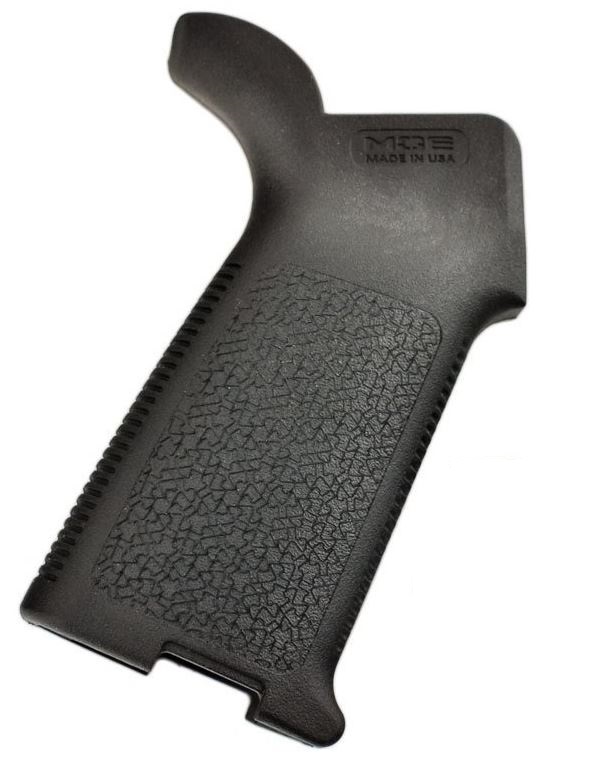 Stand-alone vertical pistol grips which allow the shooter to wrap his or her hand fully around the grip while manipulating the trigger are not allowed. 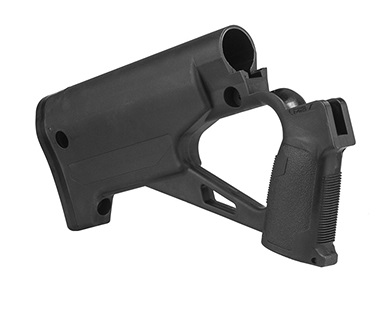 While AR builders have managed to get around pistol grip bans in other gun-restrictive states, California says thumbhole stocks which mate the buttstock to the grip, yet still allow the shooter to fully grasp the grip and trigger, are a no-go.

Any adjustable, folding, or telescoping stock is prohibited. Only fixed stocks are legal in this case.

Flash suppressors, also called flash hiders, are illegal but muzzle brakes are not explicitly banned. The California Department of Justice doesn't exactly define what separates the two. They only say that any muzzle device "designed, intended, or that functions to reduce or redirect muzzle flash from the shooter’s field of vision" is illegal, per Section 978.20 (b) of the Regulations for Assault Weapons and Large Capacity Magazines. It's probably best to play it safe and avoid any muzzle device.

Not surprisingly, California does not want your featureless AR-15 to have a grenade launcher or flare launcher attachment. That includes 40mm launchers, which are Class III NFA items (destructive devices), and 37mm launchers which can be purchased without a license or paperwork and are not regulated by the ATF under federal law.

Vertical grips or "pistol" grips installed anywhere forward of the receivers are also banned on rifles with detachable magazines.

Yes, surprisingly. The state treats them like firearms, requiring you to submit to a state-level background check before machining your receiver into a gun. You must also apply for a unique serial number through the California Department of Justice, receive your serial number, and engrave it on the lower before fabricating it. Here's a complete guide on how to serialize a firearm in California.

Can I build an AR-15 pistol in California?

As much as its anti-gun legislators don't want this, California state laws do, in some way, allow one to legally build an AR-15 pistol. California requires all semitautomatic, centerfire handguns sold in the state to be "certified as safe" (we know, we roll our eyes too) by being tested and placed on the state's aptly-named Handguns Certified for Sale.

However, an AR-15 pistol may be built as a single-shot, break-action pistol that has a "zero-round" magazine or a device called a sled installed. The pistol cannot be configured with any components that assist with semiautomatic function. That means no gas tube, piston, or blowback functionality can be used to cycle rounds in the weapon in a semiautomatic function. This is by no means legal advice for any builder. You must consult with an attorney or legal counsel before attempting to build an AR pistol or any other weapon in the state of California.

Some manufacturers have developed and managed to get semiautomatic AR-15 pistols approved on California "Handgun Roster", which allow the user to maintain such a pistol in a semiautomatic configuration with a fixed 10-round magazine.

Where Can I Find Definitions for CA's "Assault weapon" Parts?

To determine whether a specific part or accessory meets any of the definitions for what California considers assault weapon parts, you'll need to read through California Code of Regulations Title 11, Division 5: Registration Requirement, What Qualifies for Registration, and Definitions. This text covers how, exactly, California defines each feature listed in this guide, among other components of a rifle or weapon. This guide cannot serve as legal advice. If you're unsure of whether any parts you own would constitute making an assault weapon, consult with legal counsel in your state.