Red dots, holographics, ACOGs, Aimpoints, what does it all mean?! Today, we're going to clear up the misconceptions and mysteries about red dot optics. Let's clear up what types of red dots there are. Then we'll compare how each type works, and its pros and cons. Lastly, we'll dispel some myths and misnomers about laser optics in general.

That's probably your first question: A red dot sight is a type of laser optic that uses a pane of glass and red or green diode to project a "floating" reticle in the center of the optic. This floating red dot acts as your point of aim.

There are loads of weapon optics that use laser diodes and glass to project a floating reticle, and we gun lovers tend to just lump them all into the "red dot" category. But a red dot sight is just one type of laser optic that's officially called a reflex sight. And then there are holographic sights (like EOTechs) which technically don't even qualify as red dots.

Confused? Let's clear it all up. 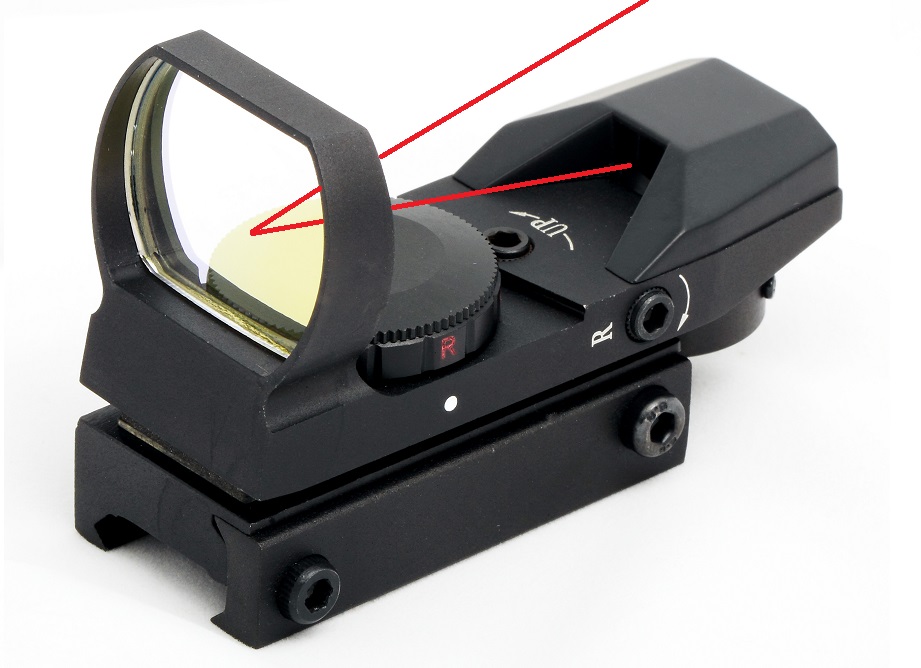 When you think of a red dot sight, the reflex sight is the type of optic you're imagining. The reflex sight is the simplest of the laser optics. It uses a single piece of glass that's concave and coated with a special reflective treatment. This curved reflective glass acts like a sort of mirror for the laser diode: The reflective treatment only reflects the laser light, while allowing regular light to pass through. This "see-through mirror" reflects the laser's dot directly back toward the shooter's eye, while allowing the shooter to view his or her target through the glass like a regular window.

How reflex sights create a reticle

Reflex sights can vary wildly in their appearance. You probably imagine an "open" reflex (like the unit above) when you're thinking about red dots. These are the most compact and common red dots. But "tube"-style reflex slights (like the Aimpoint CompM4) exist to provide a brighter reticle in a tougher package.

Holographic sights, like the popular EOTech EXPS-3 shown above, also use a laser diode and reflective lenses to produce an aiming reticle within a glass plane. But unlike reflex sights, holographic sights use a series of mirrors to project the reticle onto a pane of glass in front of the shooter's eye, rather than reflect the reticle directly back at the shooter's eye. In this case, the holographic reticle you're looking at is floating in front of you, literally, like a hologram.

How holographic sights create a reticle

Holographic sight reticles tend to be "cleaner" in appearance, and that's thanks to a more precise method of producing the reticle's shape. Instead of placing a filter over the diode itself, the diode's laser is dispersed into multiple beams. Those beams strike a high-resolution lens called a holography grating. This lens produces the reticle on the shooter's viewing glass plane with extreme sharpness.

Still confused? Think of a reflex sight as a single mirror. When a laser is pointed at the mirror, it'll bounce off the reflective surface, back toward your eye. If you move your eye, the laser will no longer hit your eyeball but will continue traveling in its original direction.

Since the reflex reticle's view depends on your eye position, changing the position of your aiming eye will make it appear as though the reticle's point of aim is changing, too.

Think of a holographic sight as a box of mirrors. When a laser is pointed into the box, the light is trapped. It instead bounces off the reflective sides of the box to produce a floating image inside the box. You can look inside this box to see the laser's image. No matter where you move your eye, the floating image (the reticle) remains in the same spot.

Now you know the difference between red dot/reflex sights, and holographic sights. Here are the important points to remember:

Q: Does one red dot look noticeably different from the other?

A: No. Holographic and reflex reticles generally look the same, with holographic reticles appearing slightly sharper. You will only notice the difference in parallax error between the two optics if you move your aiming eye while sighting a target.

Q: Which type of red dot optic is better for me?

A: Reflex sights are much more affordable. They're simpler, too. Parallax error can affect a reflex sight's accuracy, but this only happens if you can't maintain a consistent sight picture behind the optic.

If you're running and gunning fast and demand accuracy, the holographic sight will provide a slight edge. If you want a red dot optic that's lightweight, way more affordable, arguably just as reliable and which appears to function all the same, a typical reflex sight will do just fine.

Q: Can holographic and reflex sights be magnified?

A: Yes, both can be magnified. Magnifying a holographic sight or reflex sight will enlarge both the reticle and everything within the sight picture that's viewed downrange.

A: The holographic sight produces an image of a reticle using laser light. We feel this qualifies as a red dot optic. Others argue a red dot sight must project laser light directly onto the shooting eye, like a reflex sight.

Q: How does battery life compare between the two optics?

A: Reflex/red dot sights can provide up to 50,000 hours of battery life or more. Holographic sights require more power and can function for up to 1,000 to 5,000 hours.

Q: What kind of batteries do red dots and holographics use?

A: Both optics tend to use AAA, AA, or CR123 batteries. CR123-operated units get the most voltages and tend to provide the brightest reticles with the most battery life.

Q: Should I go with a red or green dot optic?

A: Red light is easier to see in low light and it won't dilate your eyes or kill your night vision like green light. Green light can provide slightly better clarity in daylight conditions. Overall, red provides better range in high and low light.

Q: Which red dot's best for a handgun and rifle?

A: Micro-reflex sights like the Sig Romeo 1 Pro are incredibly small and can fit easily on most pistols. Holographic sights can provide a slight edge for a rifle, but are typically too large for placement on handguns.