AR-15 pistols were at first seen as gimmicks, range toys meant for fun and little else. Then the pistol brace came along thanks to one Marine/U.S Army veteran, and everything changed. Now, most AR pistols offer the capability and cool points that you'd normally find in a short-barreled rifle (or SBR). You probably heard the fiasco over whether you can shoulder a brace or not. Maybe you have no idea what the deal is. Want to learn everything you can before buying your own brace? This is your full AR-15 pistol brace guide for 2019.

DISCLAIMER: Laws change frequently and we're not lawyers. This guide is not legal advice. Always double-check the law yourself, or consult with an attorney.

How the Pistol Brace Came to Be

A lot of firearm technology (especially new AR-15 parts) is born out of spite. Shooters will make new accessories to work around gun control and laws that make shooting difficult (like California's fixed-magazine law and the AR MagLock work-around).

The AR-15 brace, however, was made with the intention of helping disabled veterans at the range. In 2012, Alex Bosco was helping a friend handle an AR pistol when the range master asked he stop shooting, citing a lack of control of the weapon as a concern.

Bosco took this as an opportunity to help his friend and other wounded veterans, and the AR's pistol brace was born. Bosco tested prototypes before submitting his final design to the ATF. The agency responded with an approval letter that determined a brace does not make an AR pistol into an SBR:

"The submitted brace, when attached to a firearm, does not convert that weapon to be fired from the shoulder and would not alter the classification of a pistol or other firearm. While a firearm so equipped would still be regulated by the Gun Control Act … such a firearm would not be subject to NFA controls.”

And the rest is history. Or, so we thought.

It's 2019 now, and some new laws and letters from the ATF have changed things up.

Below is a complete history, from 2012 to present, of how the ATF has regulated and flip-flopped on AR braces and how you can legally use them:

When braces hit the market, shooters started shouldering them. After all, most braces are shaped like butt stocks even though they're intended to be secured to the forearm. The ATF was quickly overwhelmed with calls, emails, and inquiries about whether this was legal.

The ATF issued its first letter about braces in 2014:

"For the following reasons, we have determined that firing a pistol from the shoulder would not cause the pistol to be reclassified as an SBR: FTB classifies weapons based on their physical design characteristics. While usage/functionality of the weapon does influence the intended design, it is not the sole criterion for determining the classification of a weapon. Generally speaking, we do not classify weapons based on how an individual uses a weapon.”

Things were in the clear, shooters were shouldering their pistols, and no one was submitting applications to build an SBR. They didn't need to. Then the ATF issued a second letter.

"Any person who intends to use a handgun stabilizing brace as a shoulder stock on a pistol (having a rifled barrel under 16 inches in length or a smooth bore firearm with a barrel under 18 inches in length) must first file an ATF Form 1 and pay the applicable tax because the resulting firearm will be subject to all provisions of the NFA." (Source from ATF)

Suddenly, shouldering a brace would transform your AR pistol into an SBR. Inquiries and concerns kept rolling in to the ATF's offices, so they pack-pedaled and issued yet another letter clarifying the use of AR pistol braces.

“To the extent the January 2015 Open Letter implied or has been construed to hold that incidental, sporadic, or situational ‘use’ of an arm-brace (in its original approved configuration) equipped firearm from a firing position at or near the shoulder was sufficient to constitute a ‘redesign,’ such interpretations are incorrect and not consistent with ATF’s interpretation of the statute or the manner in which it has historically been enforced.” (source from ATF)

Can I shoulder my brace?

We're not lawyers, and you should double-check this yourself.

The ATF's 2017 letter says that their letter from 2015 was misinterpreted. As of now, in 2019, the ATF says "incidental, sporadic, or situational use" of an AR-15 pistol's arm brace as a shoulder stock isn't illegal.

You can read the full letter here. 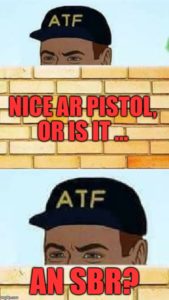 Whether or not you can legally shoulder a brace is just one of many questions shooters often have. Here are some other common questions and answers about pistol braces:

Q: Can I modify my brace?

A: No, you cannot modify your pistol brace in any way. You shouldn't even remove the straps that came installed for your forearm. Modifying your brace in any way (including sanding to make it fit better) might make the ATF think you're redesigning your brace a shoulder stock. Leave it as is, period.

Q: Can I permanently install my brace?

A: We don't recommend it. The ATF says permanently affixing your brace could make your pistol an SBR:

"If … the shooter/possessor takes affirmative steps to configure the devise for use as a shoulder stock— for example, configuring the brace so as to permanently affix it to the end of a buffer tube, (thereby creating a length that has no other purpose than to facilitate its use as a stock), removing the arm-strap, or otherwise undermining its ability to be used as a brace – and then in fact shoots the firearm from the shoulder using the accessory as a shoulder stock, that person has objectively ‘redesigned’ the firearm for purposes of the NFA." (Source from ATF, page 2, para. 3)

Q: How does the brace install on a buffer tube?

A: Most pistol braces are universal with a wide opening to accommodate nearly all buffer tube diameters (including commercial and mil-spec). Most braces' buffer tube holes measure 1.1" to 1.25" in diameter. A set screw and Allen key are typically used to secure the brace. Some buffer tubes have cut-outs or dimples for the screw, though many secure by tightening the set screw onto the shaft of the tube itself.

If you install your brace and find it's canted or too loose, wrap your buffer tube in some tape to make the fit tighter before securing. If your brace fits tightly, some talc powder or oil on the buffer tube will make it slide on more easily.

Q: How long can my brace be? Is there a limit?

A: The ATF says that to air on the side of caution, you should keep the total length of your brace under 13.5". They say that having a brace installed measuring 13.5" or greater could give justification for classifying your pistol as an SBR. This recommendation was provided by an ATF employee. No official letter from the ATF has determined this yet. A course case came about when an AR pistol owner was originally charged with owning an SBR because the ATF said his length of pull was greater than 13.5" (it was not).

There is no minimum length. Your pistol brace can be as short as you want it to be, with buffer tube limitations in mind.

Q: How is a pistol brace different from a buttstock?

A: Physically, a brace is thinner than a buttstock. Since it's not designed to be shouldered, it doesn't have a wide bottom or any padding. Most don't adjust with a spring-loaded lever like buttstocks do, either.

There are a few types of braces available. The simplest are one-piece braces that use a fin as an anchoring point for your forearm. There are wrap-around braces that use straps and two large fins to secure around your arm. Lastly, there are collapsible braces that look and act like regular buttstocks.

Let's look at some examples:

This brace is our personal favorite because of its functionality and overall look. The KAK Shockwave Blade doesn't have straps or any bulky forearm anchor. It's a single piece of polymer, making it rigged and durable. A 1.25" diameter buffer tube opening means the Blade can fit nearly all buffer tubes.

The Blade secures to your buffer tube using a set screw and Allen key. The brace's included buffer tube has little dimples to help align and tighten the brace in place. The Shockwave's length of pull measures around 13.13", making it shorter than the gray-area 13.5" length referenced by the ATF.

The Sig Brace is an O.G. unit designed by Sig Sauer in partnership with SB Tactical. The Sig Brace is essentially a re-design of the original SB 15 brace that made the whole practice popular.

The Sig and SB 15 braces use forearm wraps to secure your pistol for better recoil control and grouping. Straps are installed to secure the brace to your arm before firing, though some shooters choose to use the brace as a cheek rest as well. This brace also slips over most buffer tubes and secures using a set screw. This is the most common type of arm brace you'll find. 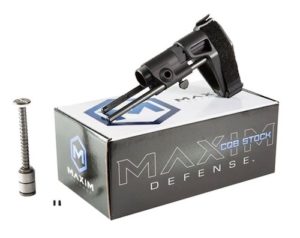 This collapsible, PDW-style AR brace is unique because it uses it's own receiver extension that mounts to the lower receiver's buffer tube housing.

The brace's guide rods slide into the extension and a set screw is tightened on one of the guide rods to set the length of pull.

This brace is interesting because it uses its own buffer and patented "silent captured" springs. This new buffer system handles recoil better and it reduces that springy, clapping noise conventional AR-15 buffers make when they cycle.

You should now have a warm-and-fuzzy about the state of AR-15 braces in 2019. If you couldn't read the whole wall of text, here's a quick summary: